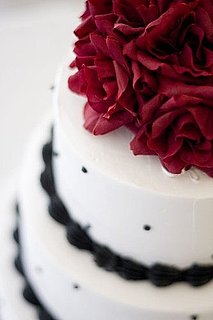 A wedding cake is like a guest of honor — it's as central to the wedding's look as the bride's dress or flowers. It's so pretty, you could eat it. And you do.

Though the cake has always been an important piece of the wedding pie (at times, it literally was pie), it wasn't always the masterpiece we eat today. See how the wedding cake has changed, what traditions we've borrowed, and what's faded away.

Roman Empire
There was no cake, but a loaf of bread to symbolize the bride's virginity. After the groom ate half, which isn't a disgusting innuendo at all, he broke the rest over her head to show his dominance. Young love!

The tradition of throwing rice, or now confetti, stems from this time, too. Guests showered the bride and groom with breadcrumbs, and when they ran out were given a mixture of nuts, dried fruit, and sweetmeats — confetto.

Medieval England
Spiced buns were stacked as high as possible, and the bride and groom had to lean over it and kiss (hence the kissing wedding toppers we see to this day) without toppling the cake. Succeeding was an auspicious sign of prosperity, happiness, and children.

Renaissance
The bride and groom often had their own cake, and the bride's cake was usually a pie — bride pie. Filled with savory foods, charms — both lucky and unlucky — were placed inside for guests to find. Finding a button meant a lifetime of spinster- or bachelorhood while finding the wedding ring meant marriage within the year.

Find out when wedding cakes went white below.

The first white wedding cakes began to appear as refined sugar became more accessible in the 16th century. White cakes did not symbolize purity and virginity until the Victorian era, but they did stand for money: the whiter the cake, the more refined (and expensive) the sugar.

19th century
Queen Victoria and Prince Albert introduced the first tiered wedding cake at their 1840 wedding, and from then on big was in. The cake was so impressive, pieces of it have been preserved and last year were on display at Windsor Castle.

Though bigger was better, most people couldn't afford, and didn't need, a multitiered cake. Typically, only the bottom layer was cake while subsequent layers were decorated hatboxes.

20th century
The big wedding cake reached its pinnacle in 1947 at Queen Elizabeth's (then a princess) wedding. The tiers reached nine feet, and the cake weighed over 500 pounds. By the end of the century, rules begin to lax and an anything-goes attitude set in. Today cakes are more likely to match the wedding's colors than be white and ornate, but they are still a big deal — the average wedding cake costs over $500.

If you are planning a wedding, happily wed, or looking for Mr. Right, start sharing your big day with our community. Just check the wedding content box on your post.