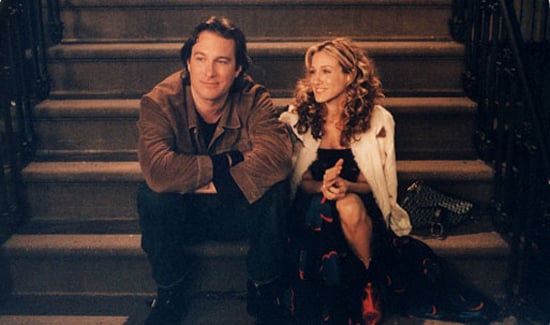 Romantic comedies, reality TV dating shows, and soap operas are all filled with dramatic relationship ups and downs. And watching these unrealistic portrayals of romance might not be an inconsequential guilty pleasure. A new study found that the more people buy into portrayals of romance on TV, the less committed they are to their relationships. But it's not because these fictional love stories make them long for the perfect relationship. In fact, those who have a higher belief in TV portrayals of romance believe relationships are more costly, and are more likely to consider alternatives, like a new partner or being single.

The study referenced reality TV shows like The Bachelor or The Hills, soap operas like Days of Our Lives, and movies like Pretty Woman or The Notebook. Participants who agreed with statements like "Television helps me understand what I can expect from my romantic relationships," or "Television presents romantic relationships as they really are in life," reported less commitment to their current relationships. These respondents said relationships are more costly, thanks to a loss of freedom and the unattractive qualities of a mate. But it's not necessarily all bad news. Since people who believe in TV romance expected higher costs associated with being in a relationship before they entered one, they did not report lower relationship satisfaction. In other words, the perceived downsides of being in relationship met their lower expectations.

If you think you're immune to the influences of fictional romance, the study's author, Jeremy Osborn of Albion College, points out that we Americans immerse ourselves in media images and "most people have no sense of the ways those images are impacting them." For many of us young women today, our early exposure to romance came from shows like Sex and the City — which surely portrayed the single life as an attractive and exciting alternative to a steady relationship. These fictional portrayals could influence us more than we think. But is that necessarily a bad thing? Weigh in below.

Weight Loss
Trying to Lose Weight? A New Study Shows Why You May Want to Try a Low-Fat Vegan Diet
by Jenny Sugar 2/12