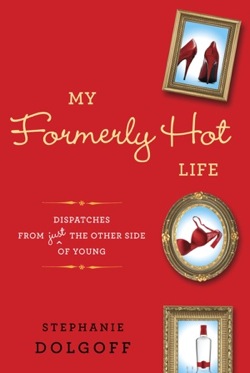 TrèsSugar: Does the term "formerly hot" sign on to a narrow definition of beauty?
Stephanie Dolgoff: I think it broadens it hugely. That's the whole point. I'm mocking the idea that hot equals just plain surface hot — like Paris Hilton means it when she says it. I'm saying hotness is a lifelong thing that you put out there. And the benefit of being older is that you have something to put out there. I'm not saying that's true for all young women, but you really don't know who you are for a long time because who you are is highly changeable. You're trying on different ways of being. And you can look beautiful while doing it, but until you figure out your essential sense of self, you can't project it. It's a different kind of hot, a different kind of happy. And they're both rich and exciting and I just want young women to not feel like they have to fear what comes next.

TS: So what makes you feel hot today?
SD: It really doesn't have much to do with appearance. It has to do with doing what I know I'm going to enjoy and have fun with and be comfortable with. Women today in their 20s seem like they have it so much more together than I did, but I tried to do things that I thought I should — "Oh, we're going to this club because everybody says it's the best club." Or, "I'm going out with this guy because he looks good on paper." Or, "I'm doing this job because that's what one does." I spent a lot of time wondering why I wasn't happier. But now that I'm older and know what makes me happy and follow it — that makes me feel hot because I'm physically comfortable, I'm emotionally comfortable. I'm more myself and the more you are yourself the hotter you feel. Purely physically, the confidence seeps through to your appearance.

TS: Do you miss anything about your 20s?
SD: I don't miss being harassed on the street. I have to admit that there was some affirmation that you got, that you're being part of a sexual dialogue, even if not a word is spoken. You enter into a social situation and there's something in the air, and you're part of it whether you willingly participate or not. That I sometimes miss. When you're young you're considered the next wave of thinking, a taste maker. As you get older, you're not hip, you're not cool, no one cares about your opinion on matters of taste. At first I was like: "Wait a minute! I have an opinion now."

TS: Do men need a separate category on "the other side of young?"

To find out what she thinks, read more.

SD: I've heard from a lot of men who say this is their experience. There are the guys who get the emotional aspect of it. I have friends who say, "I am now happy." A man can have the same struggles about doing what he thought was the right thing to do. He found his own path and that made him feel better.

TS: Do you think your book is more helpful for someone in their 20s or their 40s?
SD: For someone in the 40s, I think my book is more of an affirmation. But for someone in her 20s, I think it's a "you have a lot to look forward to message." I loved being in my 20s. I had a great time. There were a lot of insecurities, a lot of things I felt like I had to prove, but it's an incredible learning curve and it's exhilarating. But I wouldn't have minded knowing that I didn't have to worry about some things. You can go home from the bar before it closes, you're not going to miss anything. If you're not having fun at the party, it's not you're fault. Or if the guy who's hitting on you seems really smart and really nice and you feel like you should give him a chance, but you're not up for it, that's OK. Not all women go through that, but when I was in my 20s I felt like "Oh, I should really give him a chance."