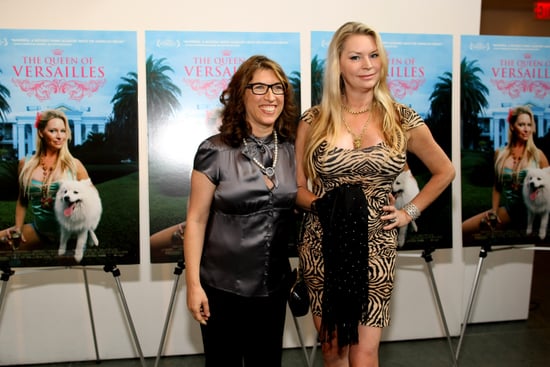 The Queen of Versailles, out today, began as a documentary about billionaire David Siegel, owner of Westgate Resorts, building the biggest and most expensive single-family home in America. But the film's concept took an intriguing turn in 2008 when the financial crisis hit and the camera crews were there to capture how David; his wife, Jackie; their seven children; and their help fared in the midst of an economic meltdown that jeopardized David's company and their dream house, "Versailles."

Photographer and filmmaker Lauren Greenfield — who won the best director award for the documentary at Sundance — was initially interested in the project because she'd been working on a photography book about wealth, consumerism, and the American dream. But it's the "queen" of the household, Jackie, who really takes center stage in the documentary. I chatted with Lauren about the film, and about its heroine, who is a former beauty queen with an engineering degree, a great sense of humor, and a propensity toward cleavage-baring clothing. Lauren says, "When I started, I thought it would be an inside view of wealth, because Jackie had this unusual personality for a rich person. She was very open and had a down-to-earth quality that I think came from her humble origins. She was able to maintain that and be a real person, so I thought she was somehow relatable in a way that could take a good side in this world." Here's what else we learned from Lauren about her subjects.

TrèsSugar: When you look at Jackie's outer appearance, it's easy to assume she is just a stereotypical trophy wife. Could you talk a little about how you showed that there's more to her than meets the eye?

Lauren Greenfield: I chose to put the part about Jackie's education and having a computer engineering degree from RIT [Rochester Institute of Technology] in the beginning of the film so that you realize that she's not a trophy wife; she's a really smart woman who decided at an early age that her beauty would get her further in terms of where she wanted to go than her engineering degree.

TS: Did your perception of her change while working on the film?

LG: My feelings about Jackie did evolve during the course of the movie. And our relationship changed, we got closer. Her relationship with the camera changed too. I opened with a scene of her posing for me, and you can see her posture for camera and the way she wants to present herself. And she's got full makeup, and you're paying attention to the outfit she's wearing. By the end of the film, it becomes much more real, that whole posturing is gone, she has no makeup on; she's barefoot, she's getting her face dermatologically enhanced, and I'm there to film layers and layers of skin being lasered off.

The other way it changed was the financial crisis, and the way that they dealt with it allowed me to see that she was really a survivor and that she had this kind of adaptability and strength that you couldn't see in the beginning when she was surrounded by all of this stuff. And also, I saw something different in her relationship with David. In the beginning, you don't know why she's married to David. He talks about falling head over heels in love with her, and she's a little bit more reluctant. We don't know if she married him for love or for money. He's a billionaire and 30 years her senior. By the end, it's obvious that she really loves him and yearns for his attention and his affection, which is harder and harder to get as he gets mired in this crisis.

LG: What I showed in the film in terms of their relationship is what I saw. That as things got harder, David isolated more, he withdrew more, he threw himself into his work, he wasn't particularly communicative, except for the interviews where he really revealed candidly what was going on. In his interactions with Jackie and the family, he was often barking. I don't know that it was personal, though. David was kind of like that with everybody, and Jackie is the one who really yearns for his love and his closeness and doesn't get it, and so we see it in their relationship. But he kind of withdraws from everybody, and what you see by the end is a real lack of communication, and I included that in the film too. It wasn't really until near the end that I realized the extent to which Jackie was unaware of many of the financial realities going on, and she has a line where she says, "I guess I'll have to see the movie to find out what's going on."

Keep reading to find out what Lauren had to say about the Real Housewives.

TS: Are there any relationship lessons you gleaned from watching how they interacted and how they handled this crisis?

LG: I don't think you can really separate their relationship from the events that are unfolding. I'm not sure that it's really their relationship falling apart. I think it's more about how they're both dealing with the events in their life that are unfolding. There's a generational aspect, and it's clear they don't communicate about a lot of things. The other thing that's clear is that they're both living in their own worlds and have a very different view of what's going on with the other person.

TS: With the popularity of the Real Housewives and other similar reality TV shows, why do you think that we are so fascinated and obsessed as a society with the superrich?

LG: I think Fran Lebowitz said at one point, Americans don't hate the rich because they always think that will be them someday, that they're impending rich. It's really this fascination with the rich that has been my subject matter and what my wealth book is really about. The subprime housing crisis wasn't caused by rich people. This aspirational, everybody wanting to go bigger and bigger and have the trappings of luxury is part of our culture, and I think popular culture has a huge effect on that. I think watching these shows, seeing our aspirational advertising, makes us want that.

One thing I wanted to do in this project was show real life. It's not the way we see it in reality shows, it's not the way we see it in advertising. [Adopted daughter] Jonquil speaks of that when she says, "When I used to see rich people on TV, I would think that every day they would wake up with a smile on their face, but now that I have it, I see that you get used to it, and you just want more and more." I think that the reason that I'm doing this project is really to examine why we have this fascination. There was a retired minister who lived in Binghamton, Jackie's hometown; he knew Jackie when she was little, and he was telling me when I went to Binghamton that he was poor, but he didn't know he was poor. They were happy with what they have, and I think that part of why we're so unhappy with what we have is because of what we see on TV, which is not even real.

Netflix
This October, Netflix Is Turning Up the Heat With a Steamy Lineup of Sexy Movies
by Emily Weaver 3 hours ago

Harry Shum Jr.
Harry Shum Jr. Is Just Excited as We Are About Crazy Rich Asians 2: "The Love Is There"
by Kelsie Gibson 3 days ago