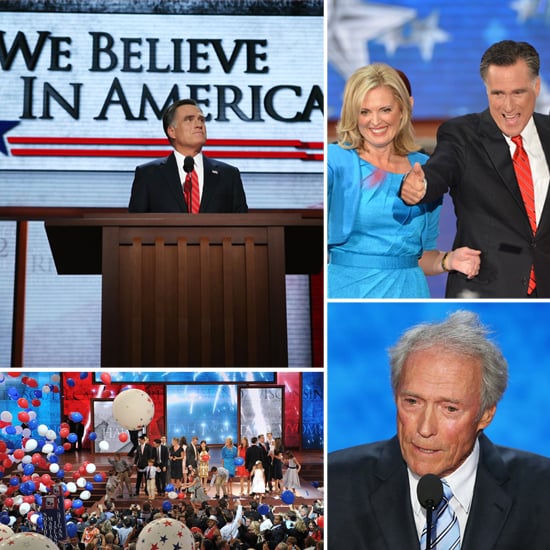 Mitt Romney Talks Church, Jobs, and the Women in His Family in RNC Speech

Tonight Mitt Romney officially accepted his presidential nomination with his speech on the final night of the Republican National Convention. He talked about his church, success, and the women in his life, as well as name-dropping famous men who recently passed away, like Neil Armstrong and Steve Jobs.

TrèsSugar editor Annie Scudder was watching from inside. She reports that there were more protests during Mitt's speech, as there were during Paul Ryan's and Rick Santorum's. She says, "At one point I couldn't hear what Mitt was saying because of people shouting protests from different parts of the arena. One person got tackled in front of me and taken out, I presume by security. Still, Mitt seemed at ease. He spoke about growing up Mormon and his unconditional love for his family." Additionally, he talked about his mom, perhaps hoping to appeal to women voters, and got big cheers when he listed off female Republican leaders and noted that he appointed many women during his tenure as governor of Massachusetts. Annie added that it put her off a little when he said this about his wife: "Ann would have succeeded at anything she wanted to do," as if she missed her chance to be successful — but he did really stress how much he valued her work as a mom.

After the speech and lots of "USA, USA" chanting, the place filled with red, white, and blue balloons, and the whole Romney troupe took to the stage with Paul Ryan and his family. See photos of Mitt's big coming-out party in Tampa, including his celebrity presenter, Clint Eastwood, now.

Beauty Reviews
I Haven't Changed My Cleanser In Years, but This New One Just Earned a Spot In My Routine
by Jessica Harrington 24 minutes ago

Beauty News
I Tried Isle of Paradise's New Self-Tanning Butter, and I Can't Believe It's Only $25
by Jessica Harrington 6 hours ago

Perfume
27 Beauty Editors, Influencers, and Experts Reveal Their Favorite Scent of the Year
by Nikita Charuza 2 days ago

Spring Fashion
I Shop For a Living, and These Are the 18 Must Haves I'm Excited to Buy For March
by Macy Cate Williams 3 days ago