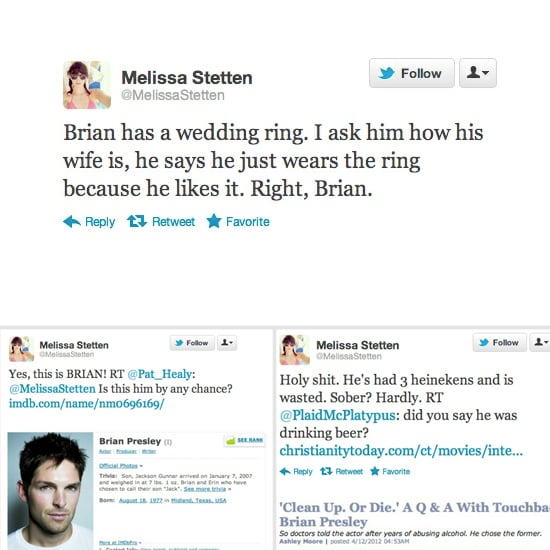 With the help of Virgin America's WiFi, model Melissa Stetten live tweeted allegedly being hit on by her fellow passenger yesterday. She let her followers know that Brian, "the actor sitting next to me on this flight talking about his role with Kurt Russell and his spiritual beliefs," was embarrassing himself by coming on to her, despite his wedding ring. Perhaps hoping to escape the awkward situation no woman wants to find herself in, she chronicled his bizarre explanations for his wedding ring: "He says he just wears the ring because he likes it." And "he was engaged for 6 months but broke it off!" At one point, according to Melissa, he went to use the airplane bathroom, beer in hand, and came out — surprise! — without the ring on.

Once Melissa's followers started tweeting back at her, things got more real. From her tweets about Brian's latest project with Matthew McConaughey, they found his IMDB page. Melissa proceeded to retweet the info, as she continued to live tweet Brian's Heineken consumption and the rest of the one-sided conversation, or "collabo," as he called it. Next, a follower found an interview Brian did with Christianity Today in April, explaining that he gave up alcohol after doctors told him to "clean up or die." Melissa retweeted the article, writing: "Holy sh*t. He's had 3 heinekens and is wasted. Sober? Hardly." Her next tweet: "Did I just ruin Brian Presley's life via twitter?" Probably, considering he's been married for 10 years, has a kid, and an alcohol problem. But did he deserve it?