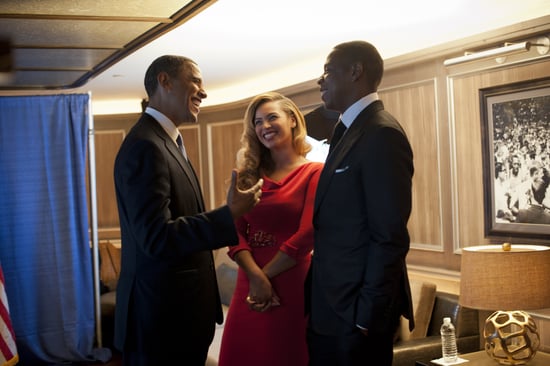 Donors dressed in their best headed to New York's 40/40 Club last night to attend a fundraiser for President Obama hosted by Jay-Z and Beyoncé Knowles. Each ticket went for $40,000, and guests enjoyed Champagne and appetizers while Beyoncé introduced the guest of honor. She said, "I can't tell you how proud we are to host tonight's event with President Obama. We believe in his vision." The president then took the stage, and said he's working for a "more fair, more just" world. In between talk of policy, the president had sweet things to say about the women in his life, including First Lady Michelle Obama, his daughters, and even Beyoncé, whom he called a close friend.

The first lady missed the fundraiser, which raised a reported $4 million for Obama's reelection bid. But Michelle Obama is playing an active role in the campaign. In fact, she's taking questions from our readers! You can submit your questions to Michelle Obama, who will be answering a selection on PopSugar in the coming weeks. Here are the highlights from President Obama's remarks at the 40/40 fundraiser.