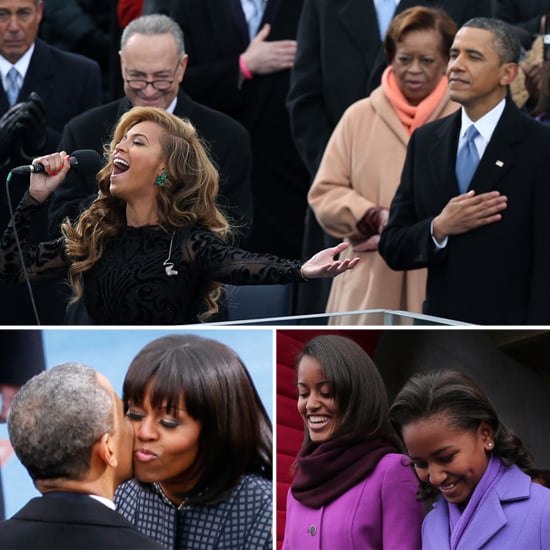 Happy Inauguration Day! Today, on Martin Luther King Jr. Day, Obama supporters — including celebrities like Jay-Z and Beyoncé Knowles, who sang the national anthem — crammed into the National Mall to celebrate Barack Obama's swearing-in for a second term as president of the United States.

We're on the ground at the event, and editor Annie Scudder reported that there were big cheers for Hillary and Bill Clinton when they arrived. She added, "The crowd is friendly and on their toes to see. The people around me were fans of Michelle and her new hairstyle, of course. Her bangs are the talk of the town!" Obama delivered a hopeful speech, saying, "America's possibilities are limitless," and that our strengths include "youth and drive, diversity and openness." Obama's message about investing in our future got big cheers from the crowd, said Annie. Equal pay for women and gay equality also fired people up, as did his comments about reforming voting restrictions and immigration.

President Obama and Vice President Joe Biden were actually sworn in yesterday during a private ceremony, while the official public event took place in Washington DC today. The Jan. 21 festivities include the swearing-in ceremony, a luncheon, a parade, and two inaugural balls. See all the photos from the star-studded inauguration ceremony now!