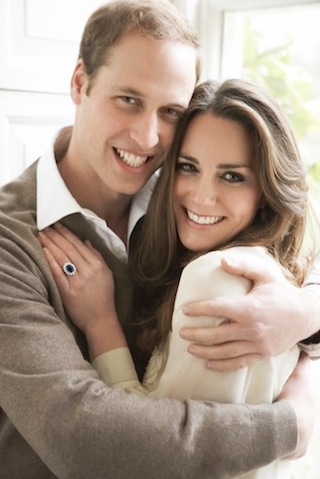 The chance to take professional photos as a couple doesn't come along often. So many people take their engagement as a chance to dress up and have their pictures taken to mark the once-in-a-lifetime moment.

Sometimes the shots are sweet and simple, like this recently released photo of Prince William and Kate Middleton taken by famed fashion photographer Mario Testino. Other times they're against the background of crashing waves or somewhere else you probably wouldn't be strolling around in a fancy dress. And some get really creative, setting up romantic movie-inspired photo shoots. No matter where they're taken, they often end up on Facebook. Do you think they're a do or a don't?

Zara
25 New Zara Pieces That Will Sell Out by November, According to Shopping Pros
by Macy Cate Williams 18 hours ago

Product Reviews
I Own So Many Hoodies, but I Can't Stop Wearing This Cozy Sherpa One
by Krista Jones 1 hour ago

Halloween
Located at a Haunted Mansion, This Skeleton-Themed Bridal Shoot Is as Bone-Chilling as You'd Expect
by Haley Lyndes 17 hours ago

Product Reviews
I Ordered Glasses For the First Time Online, and It Was Both Easy and Affordable
by Krista Jones 3 days ago

Halloween
There Are So Many Elegant Details in This Halloween Wedding Shoot, We Can't Keep Track!
by Haley Lyndes 4 days ago