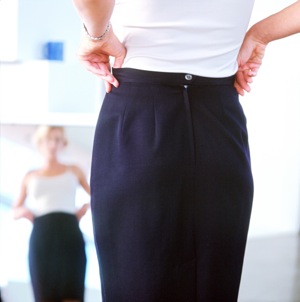 When members of the media or fashion industry talk about moving away from thin models in favor of "real women" they seem to forget that "real women" come in all shapes and sizes. While curves can send a signal of femininity, striving for perfect proportions and ample cleavage won't help any woman's body image. So when the UK's equality minister Lynne Featherstone held up Mad Men's Christina Hendricks as a healthy role model for young women earlier this week, she may have missed the mark: if women are going to embrace their bodies, they need to stop comparing themselves to others.

It's true that Christina's voluptuous figure adds more diversity to the often-underweight images we see on TV, and Featherstone later clarified that she just wanted to celebrate an alternative to "stick insects." But elevating Christina's look to role-model status does little to stop society from valuing one body over the other. And the common tendency to reduce the actress's talents to her body doesn't send a positive message.

If a government minister charged with boosting body confidence among young women wants to succeed, one Guardian writer explains, she "should throw out all notions of obsessing about feminine beauty and concentrate on helping young girls think about the size of their achievements rather than the flatness of their navel." And if we're going to look for body image role models, let's celebrate women because of their confidence or healthy lifestyles, not their bra sizes.

Wedding
The Setting, the Gown, the Castle — This Northern Scotland Elopement Shoot Is Really Something Else
by Haley Lyndes 3 days ago

Healthy Living
I Don't Want My Old Body Back, and Here's Why You Shouldn't Either
by Kennedy Hill 3 weeks ago

Netflix
Don't Come at Lizzo With Those "Brave" Comments, 'Cause She'll Have None of That, Thanks
by Perri Konecky 3 weeks ago