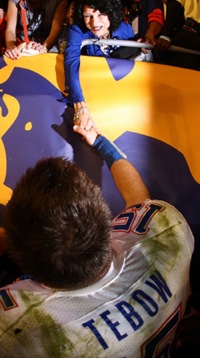 Nothing brings Americans together like the Super Bowl. Even if you hate football, you probably like some sort of junk food or beverage available at a Super Bowl party. Conversely, nothing divides Americans quite like abortion. The debate is so explosive that the two sides often spend more time arguing than working together to decrease the need for abortion altogether. Put the two things together and you have a super controversy.

CBS has approved a commercial sponsored by Focus on the Family to run during the Super Bowl. The ad does not take a subtle approach to getting the pro-life message out; instead it asks viewers to imagine if college football star Tim Tebow's mother Pam had aborted him.

Pam recounts that after getting sick during a mission trip to the Philippines, doctors recommended she abort her fifth child, Tim. If she had followed their advice, the logic suggests, Tim would never have won the Heisman Trophy, Florida would never had won two football championships, and Pam wouldn't have her wonderful son. The ad misses the point that Pam Tebow was still given a choice between risking her health and having the baby, or following the doctors' recommendation for an abortion. But leaving aside the merits of the argument, do you think the ad should run during the Super Bowl?

Rita Moreno
Rita Moreno Reflects on Her Botched Abortion in Wake of Roe v. Wade Being Overturned
by Sabienna Bowman 10 hours ago