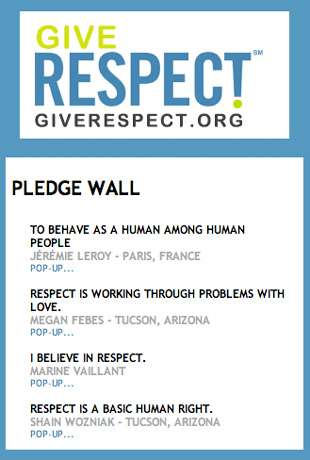 October is National Domestic Violence Awareness Month, a time to remind communities that marital, dating, and sexual violence threatens the sense of well-being everyone needs to thrive. While women are the most obvious victims, violence in the home can also impact a child's entire life.

The Family Violence Prevention Fund's Respect Wall lets you declare that you're ready to take a stand against relationship violence. Megan Darko in Four Oaks, NC promises to treat "others as emotional beings, kindly, and politely, no matter what." Jérémie Leroy in Paris, France pledges "to behave as a human among human people." Alex Goldston in Houston, TX says: "Respect requires taking into consideration not just the intent of your actions, but the actual outcome as well."

FVPF believes it can prevent domestic and dating violence by spreading a positive message of everyday respect. What does respect mean to you?

Love And SexRace And Culture