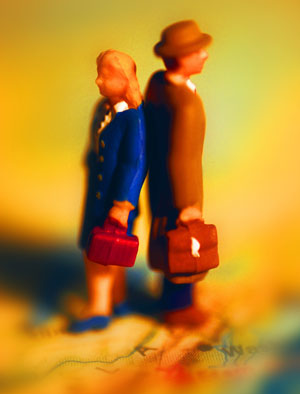 Nothing can kill the buzz of getting engaged like hearing the oft-quoted statistic that 50 percent of all marriages end in divorce. It's probably one of the most frequently quoted stats in modern society, yet even the researchers credited with it — at the Forest Institute in Springfield, MO — aren't sure where it came from. "It's a very murky statistic," says Jennifer Baker, director of the marriage- and family-therapy programs at the institute.

According to a story in the latest issue of Time, data collection varies wildly from state to state, and some states don't even track marriage and divorce rates, making a national average pretty much impossible to arrive at.

Based on new stats uncovered by Tara Parker-Pope in her new book, For Better: The Science of a Good Marriage, marital stability is on the rise since more women have started going to college and marrying later:

For example, about 23 percent of college graduates who married in the '70s split within 10 years. For those who wed in the '90s, the rate dropped to 16 percent.

While marrying age makes a difference, college also plays heavily into the success statistics. For more on the implications, keep reading.

Based on research out of University of Pennsylvania's Wharton School, more than 80 percent of college graduates age 26 or older who got married in the 1980s were still married after 20 years. The 50 percent figure comes in among people who marry under the age of 26 and don't attend college: 49 percent of people in that group had marriages end after 20 years.

Sadly, notes Penn State sociologist Paul Amato, the people most likely to get divorced are also less equipped to deal with the aftereffects. We can chuckle all we want about wealthy wives hosting predivorce parties with lawyers and psychics on hand, but the reality is anything but a party.

Image Source: Thinkstock
RelationshipsDivorceMarriageNewsLove And Sex
Around The Web