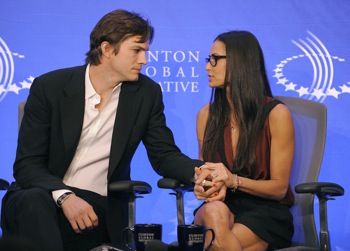 Ashton Kutcher has admitted that he tweets wife Demi Moore even when she's sitting right next to him. It's not because he's giving her the silent treatment or because he's lazy. Ashton says he's simply engaging in a modern form of PDA. He recently told a tech conference:

"A lot of times my wife and I sit across from each other and tweet, it's a little bizarre. It's the same reason why you send roses to a woman at work. Sometimes people like to be adored in public."

For fun, let's examine the pros and cons of receiving a tweet rather than roses:

If the goal is public adoration, maybe the best option is to send flowers and then tweet about how you sent your girlfriend flowers. But if you had to choose, which would you prefer?

Spotify
Spotify Has a New Device That Hooks Up to Your Car, and It's Free For a Limited Time
by Lauren Harano 2 weeks ago

Digital Life
Miss Going to Your Favorite Cafe? This Website Brings the Best Coffee-Shop Atmosphere to You
by Lauren Harano 3 weeks ago