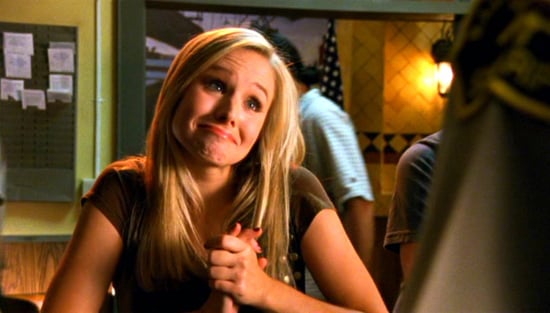 Today is Kristen Bell's birthday, and the new mom and lover of sloths has a lot to celebrate in her 33rd year of life. After deciding to wait to marry her fiancé, Dax Shepard, until California legalized same-sex marriage, Kristen tweeted a proposal to Dax when DOMA fell in June. (He accepted.) And the star of the cult TV show Veronica Mars, which ended in 2007, will be reviving her role as the sleuthing teen with the Veronica Mars movie. There's even a book series in the works inspired by the character she made famous. We loved the spunky and witty detective for her snappy lines, especially when it came to relationships. Get Veronica's deductions on dating and sex now!

On Boobs and Nudity

"If you have words written on yourself, it's not nudity; it's political speech. Taking control of one's body to turn the objectifying male gaze back on itself."

Cindy 'Mac' Mackenzie: "I read in FHM that boys like bare breasts."
Veronica: "Interesting. I did not know that. Bare breasts you say?"

Troy Vandegraff: "Flat?"
Veronica Mars: "Just as God made me."

"The best way to keep a guy at least 10 feet away? Dry-heave. Vomit is the new mace."

"You can laser a guy's name off your *ss, but I wonder whether you can really ever cut him out of your heart."

Deborah Hauser: "No, Gia, chlamydia is not a flower."
Gia Goodman: "Well it's all over the trellis at our beach house."
Veronica: "Your trellis is a whore."

On Love and Marriage

"Now, maybe people would say they'd never install a tracking device in their significant other's car, but I think that's just because they don't know how."

"If true love comes looking for me, I'll be over by the espresso machine."

"When you rip off the breakaway pants, thrust your pelvis toward the bachelorette. Remember, it's her special day."

Gia Goodman: "Wow. How Mission: Impossible. I feel like at any moment Tom Cruise is going to dangle from the ceiling on cables."
Veronica: "Great. Now I won't be able to sleep. I hope he doesn't try to marry me."

On Talking Sex With Your Parents

Keith: "How was your date?"
Veronica: "Ah, you know. Lousy conversation, but the sex was fantastic."
Keith: "That's not funny."

Kristen Bell
Kristen Bell Wants to Make Self-Care Affordable Again: "It's Not Fair That Rich People Get the Good Stuff"
by Kelsey Castañon 1 week ago