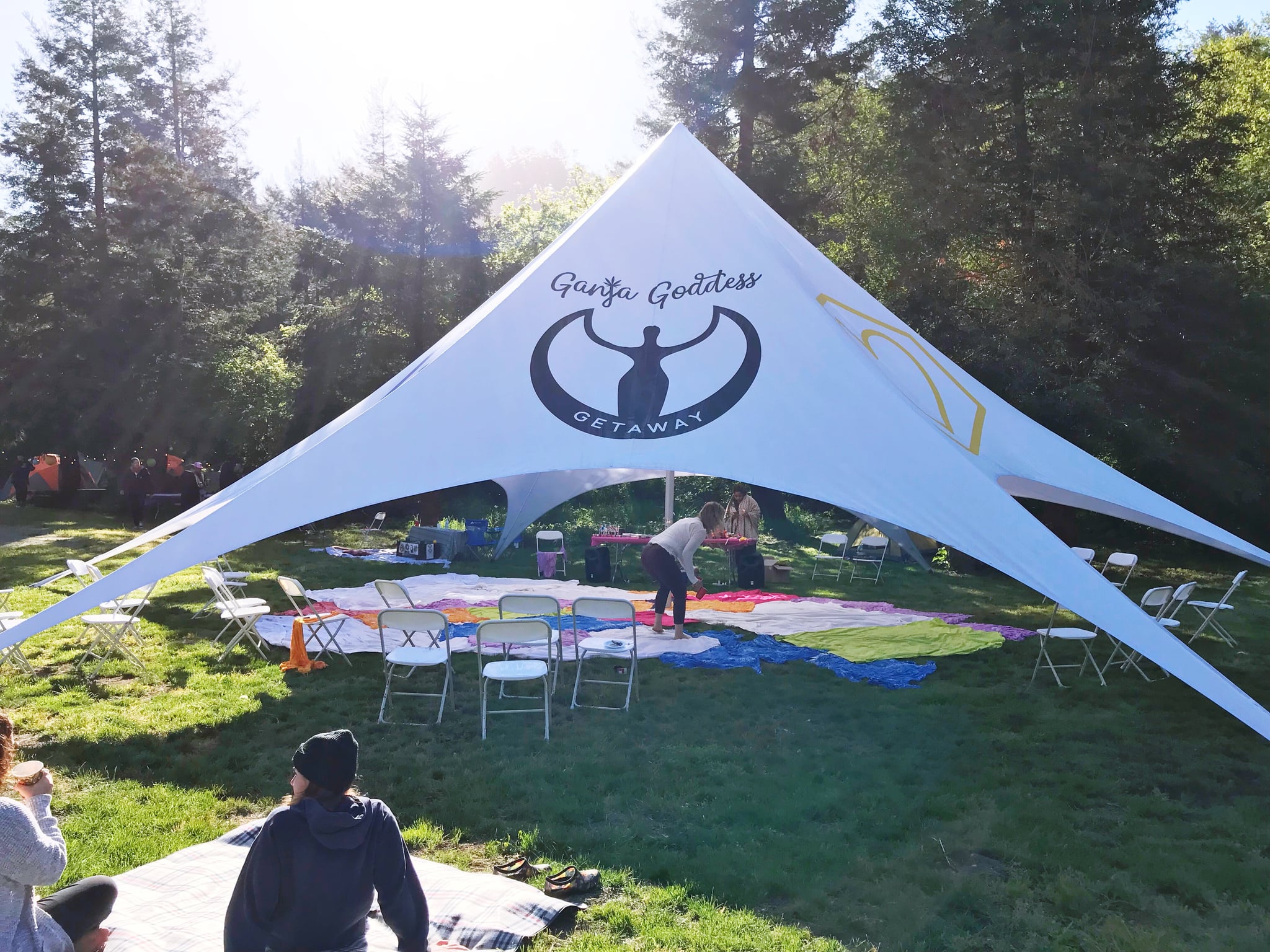 "Make sure you grab some breakfast and hit the dab bar!" It was 8:40 in the morning and this was my first set of instructions when I arrived at the campgrounds just south of Half Moon Bay, CA. I shouldn't have expected anything less than a wake and bake at Ganja Goddess Getaway, a weekend-long retreat for female-identifying cannabis enthusiasts and basically my dream vacation.

Related:
I'm a Fitness Editor and This Is Why I Smoke Weed Every Day

I unfortunately missed the 4/20 festivities the day before — which were reportedly "f*cking epic" — so I joined the following morning from San Francisco instead. Some women were just getting out of their tents while others were sleepily eating breakfast or taking their first dabs of the morning. In case you're unfamiliar with dabbing, it involves heating a small amount of cannabis extract on a "nail" surface (that's usually scorched with a blow torch) and inhaling through a dab rig (a bong-like contraption). It's a potent method of consumption and probably sounds/looks gnarly to those who've never dabbed. So, I grabbed a poppyseed muffin and got in line for my turn.

Ganja Goddess Getaway was founded by cannabis expert Deidra Bagdasarian, aka Miss Bliss. At the start of 2016, Deidra had the idea for a cannabis retreat for women and began reaching out to the cannabis community. By the end of the year, she partnered with four more women who make up the founding sisters today. Although GGG is hosted at various sites throughout California, from the Bay Area to Coachella Valley (with the exception of one event in Oregon), the mission is the same for all: "To help women connect to their inner goddess using cannabis as a creative and spiritual self-improvement tool. And to get high AF," Deidra said. 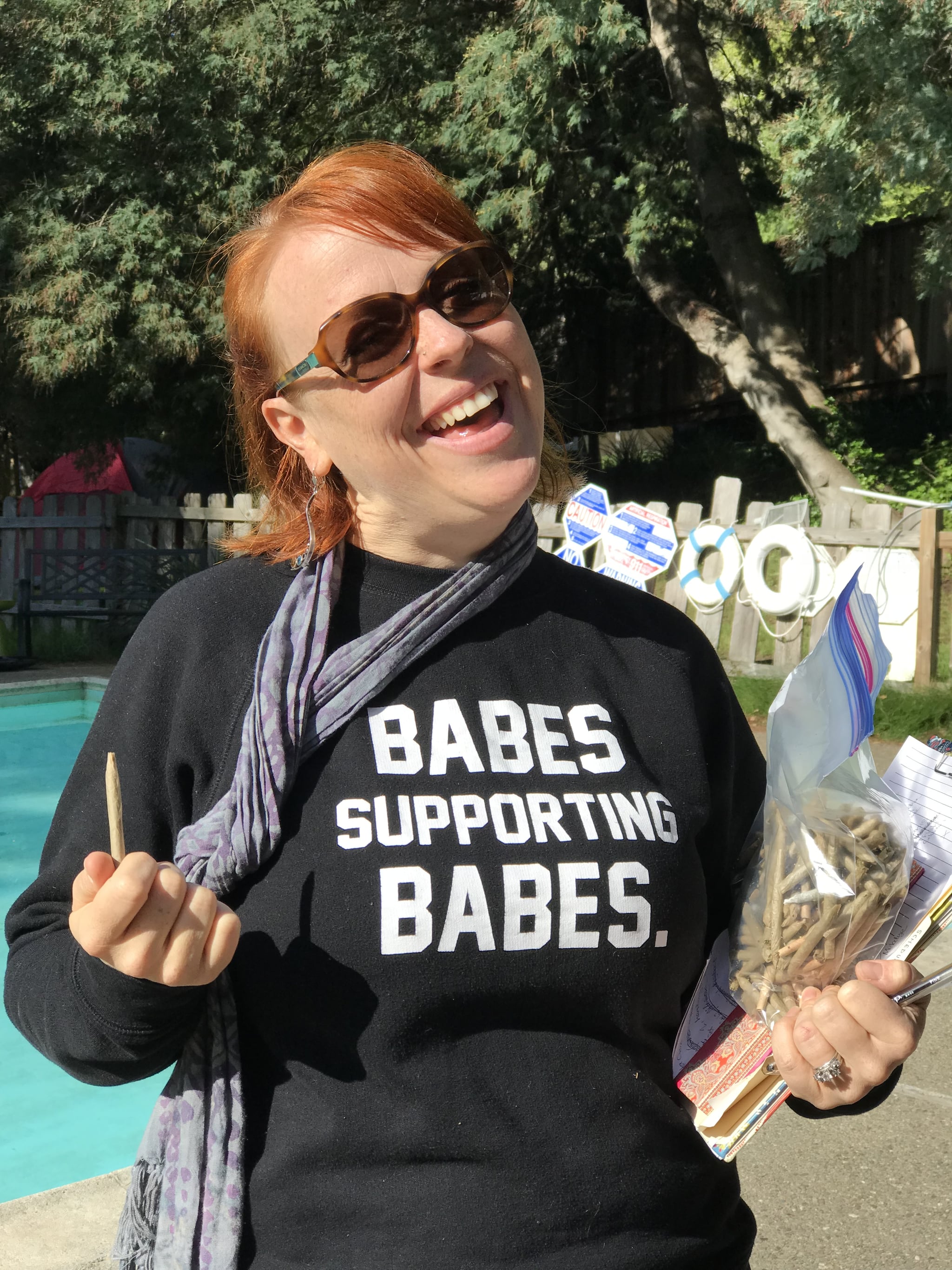 My overnight stay with about 130 other women included activities like morning meditations, a women in cannabis panel, belly dancing, laughter yoga — and of course, all-you-can-smoke weed. The only rule, aside from "puff, puff, pass," was that no alcohol was permitted on grounds, as it was prohibited by the event center. In hindsight, the no-booze policy was probably for the best because I had never been so high for 28 hours straight before this weekend. In addition to the dab bar, Joint Ferries walked around regularly making sure everyone had something to smoke on. The joints, volcanoes (a giant bag of vaporized cannabis), edibles, pipes, and blunts the size of King Kong's fingers never slowed down. It was more weed than I knew what to do with, and I never thought I'd find myself running away from a joint before. "Please, no more, I can't," I laughed half-jokingly, half-in all seriousness. At one point around the campfire, we had lost track of how many joints were in rotation and we'd end up with two joints at a time. I thought I smoked a ton of weed, but damn, these women could hang. 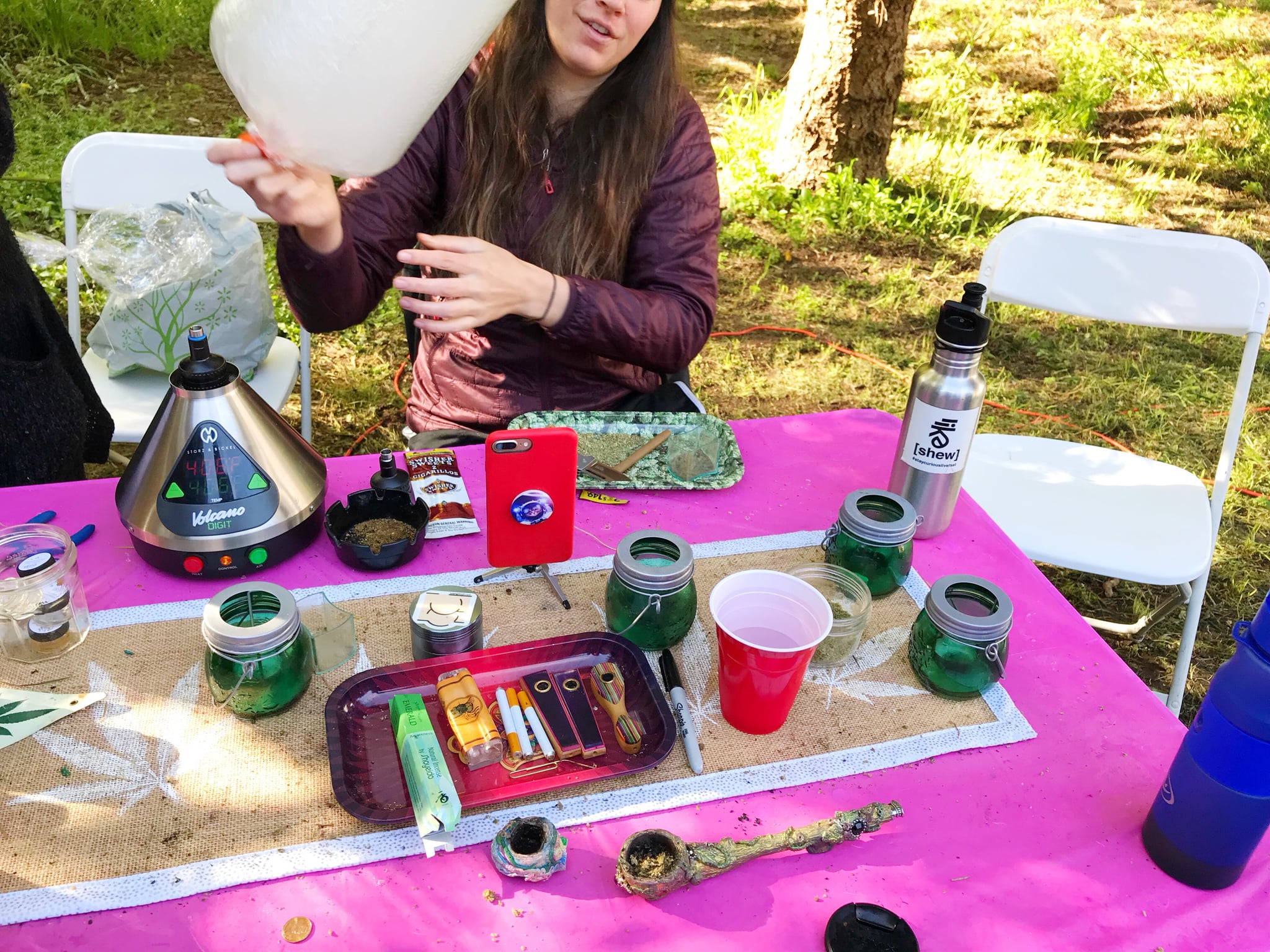 Being completely stoned off your ass among a hundred strangers can really go either way, which is why I didn't expect to feel so comfortable with every woman there. When I first pulled up to the address, I had no idea which direction the campgrounds were in. Thankfully, two sisters from Wisconsin who had just returned from their quest for coffee helped me carry my things to the site, setting the tone for the rest of the weekend. Never at any point did I feel judged by anyone there, and never did anyone walk past me without smiling and saying "hi."

But one thing I most appreciated was the eclectic mix of people. It was such a beautiful and diverse range of ages (from 21 to 70-somethings!), ethnicities, backgrounds, etc. Over half of the sisterhood traveled from out of state and even out of the country to enjoy a weekend of legal marijuana with other women. I met a mother and daughter who were using their trip as a bonding experience, childhood friends from Miami who had found out about GGG on Facebook, and mothers who live in states where marijuana still isn't legalized and constantly fear hearing a knock on their door. Despite all of our differences, one thing each and every one of us shared was our love for cannabis. If others could hear how passionately these women spoke about it, it would make even the biggest skeptics reconsider their stance. 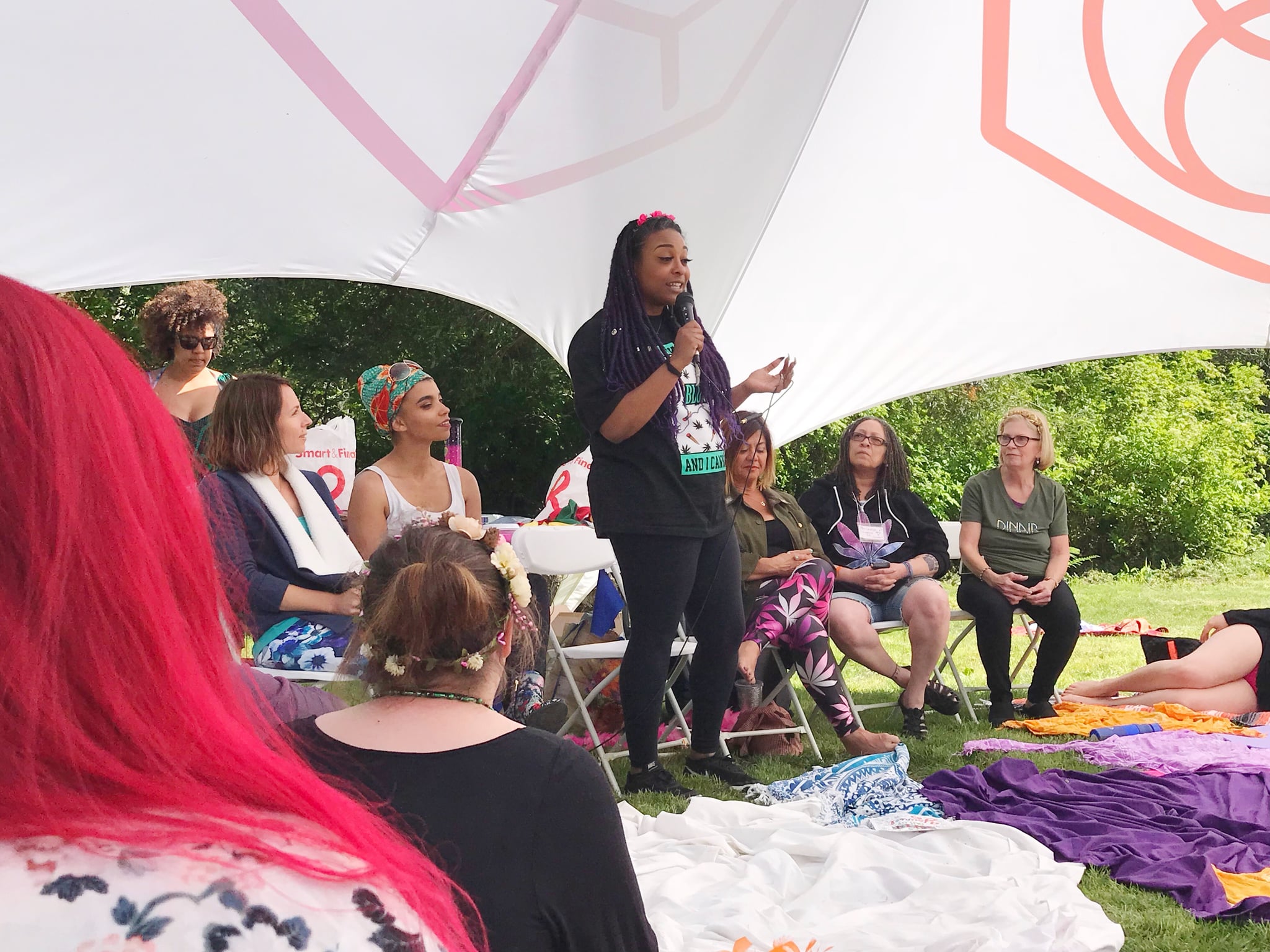 In-between workshops, some of us smoked and colored in adult coloring books while others wrote sweet notes to other sisters on the Goddess Board, but many of us were also participating in engaging conversations about cannabis. Living inside my bubble of San Francisco, I often forget that weed is unwelcome in most parts of the US. Women shared stories of how they use it to relieve nerve pain, how marijuana helps them be a better parent, and how frustrating it is to live in a state that still supports green prohibition. The fact there was zero cell reception also helped us stay present and connected to one another.

Related:
I Tried "Weed Lube" and Oh My God, Yes

Ganja Goddess Getaway is far more than just about getting high — although that's also a huge component. It's built on sisterhood, self-love, friendship, inclusivity, and female empowerment, all of which I witnessed and felt during my stay. There were crystals and tears and plenty of other things that would normally make me uncomfortable. But because everyone who was part of this retreat was so incredibly open-minded and welcoming, I felt a strong need to reciprocate in the same sense. It felt like Summer camp as a kid — but better. Not only because there was endless weed available, but because I was able to be a part of this community of incredible women I never would've had the chance to meet otherwise. After the closing awards ceremony, social handles and hugs were exchanged, and I officially became part of a community of Ganja Goddesses.

Image Source: POPSUGAR Photography / Nicole Yi
Any cannabis products referenced above are not intended to diagnose, treat, cure, or prevent any disease. The writer is not a medical doctor, and their experience is based on personal use, the results of which may not be typical or intended. The legality of cannabis products varies by state, and readers are encouraged to check their local laws before purchasing and using cannabis products. Nothing in this article should be construed as advice regarding the legal status of cannabis products. Any views expressed in this article by a third-party sponsor are those of such sponsor, and do not necessarily represent the views of POPSUGAR.
FriendshipWomenWellnessTravelMarijuana 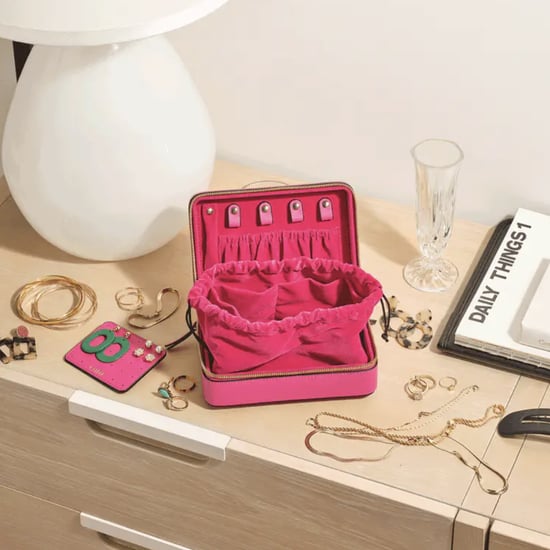