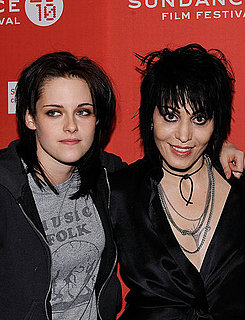 It may look like Kristen Stewart and Joan Jett share only their hairstyles, and that's true for the most part. The stark difference between the icon and the actress is what makes The Runaways so enticing. What director wouldn't say "get me America's favorite virginal vampire lover to play a feminist glam-rock queen"?

Still they must have something in common besides a love of razor cuts! Check out what I found below.

Get the final two after the jump.