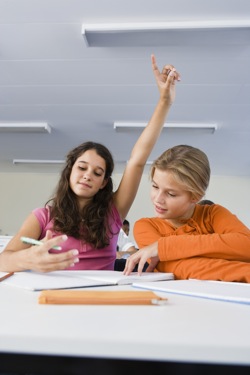 I can't remember when I learned women had a marginalized history, but I remember thinking it didn't make sense; girls were smarter than boys. There was evidence of it everywhere in elementary school. Boys forgot their homework, kept disheveled desks, and never participated. Because of this I'm not really surprised to learn a new study found girls believe they are cleverer, better behaved, and harder working than boys, and by age eight boys believe girls are better, too.

Yet in junior high, something changes and a lot of girls stop trying. It becomes uncool to look smart, which reminds me of my high school self. While I never wanted to look stupid, I had a rule to actively curb looking like a kissup: I never, or at least very rarely, answered more than one question per class. Enough to satisfy participation requirements, but not enough to get a bad rap among students.

All this reminds me of a This American Life episode where Robin Epstein, a question writer for a now-defunct trivia show for teenage girls, lamented how hugely she overestimated teen girls' intelligence. The show was a disaster. Girls could hardly answer anything, and the questions had to be dumbed down until they looked like boy-crazy ditzes. The very stereotype the show was trying to fight.

In This American Life, Robin cites research done by feminist Carol Gilligan, who has written several books on girls and women. She found that until age 11, girls want to raise their hands and give the right answer, but around 12 or 13 something changes and looking smart becomes a liability.

Given the age, I can only presume that change is puberty and an interest in boys. Maybe they don't want to intimidate the boys who've conceded girls are smarter since age eight? What do you think changes?

Image Source: Thinkstock
Around The Web