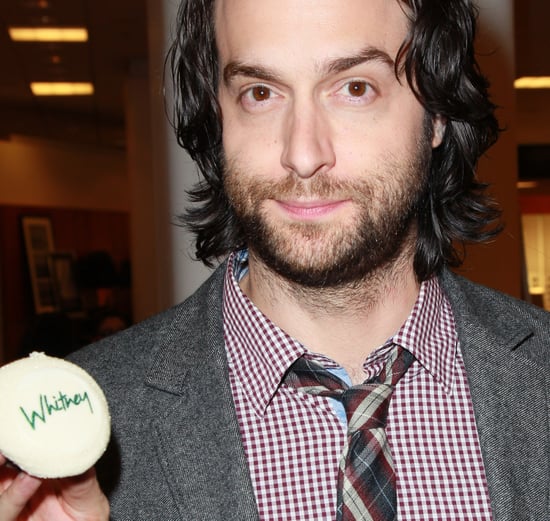 Single and looking for eligible, normal guys? Don't move to LA, says Chris D'Elia, who plays a lovable and hilarious boyfriend on NBC's Whitney. That's some of the advice the standup comedian dished out in response to our readers' questions. Yesterday he addressed your Valentine's Day dilemmas, and today's he's back to tackle general dating and love debacles.

Is it fair to barter TV shows with my fiancé? As in, two hours of The Bachelor equals half of a football game?

Where do normal men hang out in LA? If you can solve this mystery (preferably with a chart that includes days of the week, locations, and "type" of guy) I guarantee you could sell it for millions in addition to making this single lady very happy.

Chris: I don't think that's a fair question. I think people move to LA because they're not normal.

What's the best way to suggest to any man that he needs to get some new clothes?

Chris: The worst thing you could do is beat around the bush, or side step it. You got to just say it. But I had an ex, and she was like "you got to get Converse," and she kept saying it — "get Converse." I was finally like, "OK, I'll get a pair of Converse." And I got a pair of Converse. I got those regular Chuck Taylor ones, but I literally got every single color of the Converse, and I wore them all the time. And a year later, she was like "All you wear is Converse." So you have to be careful with that, you'll create a monster.

Why do men need their man caves?

Chris: I think that men think they need their man caves. They don't really do. They think they want them, and then the second they do get them and they have alone time and time away from the girl, and the girl is really cool with giving them alone time, then that's when they, or at least I, start to think, "So, why are you so cool with me being alone? What's wrong with me that you don't want to be with me every second."

How can I ask my husband to do housework without sounding like a task master?

Chris: Don't make a list. Don't pin anything up on the fridge. I'm a dude, obviously, and when I'm not in a relationship, I don't do any of that stuff. I don't do laundry until I want to. But if I live with a girl, you have to do it when she wants to or when we want to, which sucks. That totally messes up my day. So just come out and just say it. Just have a good attitude about it and don't wait until you get frustrated.

How would you describe your perfect woman and how could she attract your attention?

Chris: Tweet at me. That gets my attention. The number one thing is, you have to have a good attitude. Find the humor and the fun in things that aren't even fun. The two things that turn me off completely are negativity and if a girl's cheap. I mean, I'll pay for everything, but if a girl just mentions it, that's a turn off. That and DON'T WEAR FLIP-FLOPS. It's terrible. I mean come on. Put something on your feet. What if you have to run away? You're dead.

I'm moving in with my boyfriend next month and it's the first time I'm living with a man. What should I prepare for? Get the answer and much more advice from Chris below!

Chris: Oh man . . . You got to . . . ai yai yai. My instinct is to be like, "Don't do it." I can't even give you advice for that. I mean every guy is different, but just prepare to know him in a different way and be OK with it, because the times I've lived with girls, and I've lived with some very sweet girls, I felt bad that they had to live with me.

What are some things women say/do that piss you men off and that we should stop saying or doing immediately?

Chris: Oh. My biggest pet peeve is when a girl says, "I'm not into drama." Why are you even mentioning it?! That's dramatic in itself! Women, tend to talk more than men, and they do this thing where they say things that can easily be shown. Like, they don't need to do that. Women will be like, "I'm the craziest girl you ever met." Or, "I'm the silliest girl ever." Or, "Oh, I'm so lucky." Just be that. That might be an LA thing . . . to be honest.

Chris: Gosh. I feel like I don't even go out on dates . . . I got to think about this. I'm just so busy. I really like it, maybe it's because I'm conceited, when a woman asks me about stuff I'm talking about. Like, if I'm telling a story, and she breaks off and asks me questions about something in that story. A girl who pays attention is very cool. It's really hard to pay attention to someone. I understand. I get it. I get bored a lot when I'm talking to people, but I try. So I'd like for the girl to try, too.

Do you have any dos and don'ts for first dates?

Check out a preview of this week's Whitney, and be sure to read Chris D'Elia's funny Valentine's Day advice!