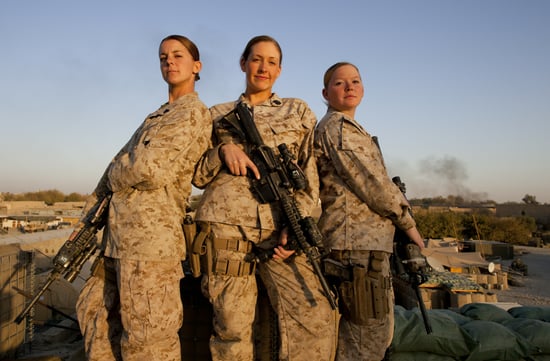 Ask GOP presidential candidate Rick Santorum why women shouldn't be allowed to serve in combat roles, and he will give you various reasons. First off, a man's emotions. Santorum believes men will try to save their fellow female soldiers, explaining this weekend: "instead of focused on the mission, they may be more concerned about protecting someone who may be in a vulnerable position, a woman in a vulnerable position." In addition to chivalry, Rick says "You throw on top of that just simply physical strength and capabilities," and women simply can't handle the job. Fortunately, the military, which recently opened 14,000 combat jobs up to women including tank mechanic and front-line intelligence, doesn't completely agree with Rick, and experts say "sexist" attitudes are responsible for a policy against trained female soldiers serving in combat positions.

Sociologist Ryan Kelty, who specializes in studying the military, tells LiveScience that the old-fashioned belief that women must be protected is not a good enough reason to exclude women who want to and are capable of serving their country. In other words, chivalry is not a legitimate basis to deny a woman employment, especially when there is no evidence that professional and highly trained male and female soldiers are incapable of carrying out their missions. Kelty explains the military should employ gender-neutral, objective requirements. For example, a soldier should be able to carry 100 pounds for eight hours, regardless of gender.

There may be back and forth, but the truth is that women already serve in these combat roles. In Iraq and Afghanistan, 144 women have lost their lives, 60 of them in combat, while 865 have been wounded. And countries including Canada, Israel, and Australia already allow women in close-combat roles. Despite the slow evolution of American rules on women serving, it can be said that the US military doesn't have the most retro policy. In China, women recruits must display a talent like singing or dancing and Russia holds a Miss Russian Army beauty pageant.