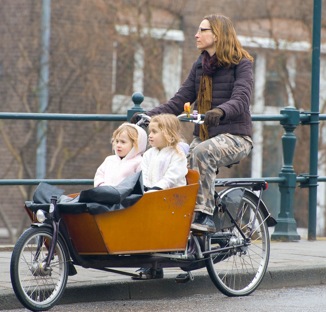 In the Netherlands only 10 percent of women have full-time jobs, a rate that pales to the 75 percent of working American women employed full time and increasingly filling management roles. But as expat Jessica Olien points out in Slate this week, the Netherlands consistently ranks in the top five countries for women. How come?

Instead of fighting for equal wages, Dutch women want the right to cut hours without repercussions from employers. A working female journalist explains: "We look at the world of management — and it is a man's world — and we think, oh I could do that if I wanted. But I'd rather enjoy my life."

The UN looked into the situation, worried that Dutch women did not have the same access as men, and found that in fact, many women did not want to work more. As a result they have more time to exercise, garden, and enjoy time with their kids or friends. In the US, our work influences feelings of independence and self-worth. For many of us, the dialogue of women's liberation is closely linked to the ability to climb the career success ladder; yet Dutch society promotes the freedom to live a balanced life, and studies show that this type of freedom results in greater levels of happiness.

Perhaps Dutch women are OK with not fully participating in the labor market because they've long had freedom to work. Ever since a plague put women to work in the 14th century, Dutch women have been able to work outside the home. Some historians consider that the first feminist revolution. Mix that past with a social safety net, which frees you from concerns over college loans or health insurance, and you can actually choose to not work. Do you wish more women here had that choice?

The NetherlandsFeminismCulturePollMenWork
Around The Web