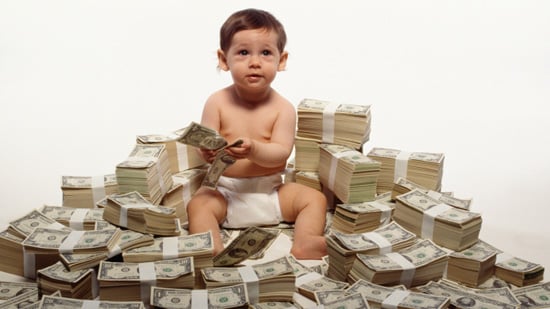 Hold onto your wallets! The average cost of raising a child from birth to age 17 (not including college or life insurance) is now a whopping $222,360, a 22 percent increase from 1960 when the US government began collecting such data. And for those mamas who welcomed an addition to their family last year, the costs will increase to $286,050 for the average middle-class family and $475,680 for wealthier ones. According to the US Department of Agriculture's Expenditures on Children by Families, the price of raising a child has increased dramatically over the past 50 years and how the parents distribute their child-rearing budgets has shifted too. Take this quiz to how the money is spent.

Raising Baby: See If You Know Where the Money Goes

Which of the following is the greatest child-rearing expense accounting for 31 to 35 percent of total expenses?

True or False: Parents of only children tend to spend more on that child than parents of multiple kids?

How has a family's spending on children's clothes (as a percentage of total child-rearing expenses) changed since 1960?

True or False: Since 1960, the percentage of a family's total child-rearing costs dedicated to health care have tripled.

Which of the following areas of expenses increased the most (as a percentage of total child-rearing costs) since 1960?