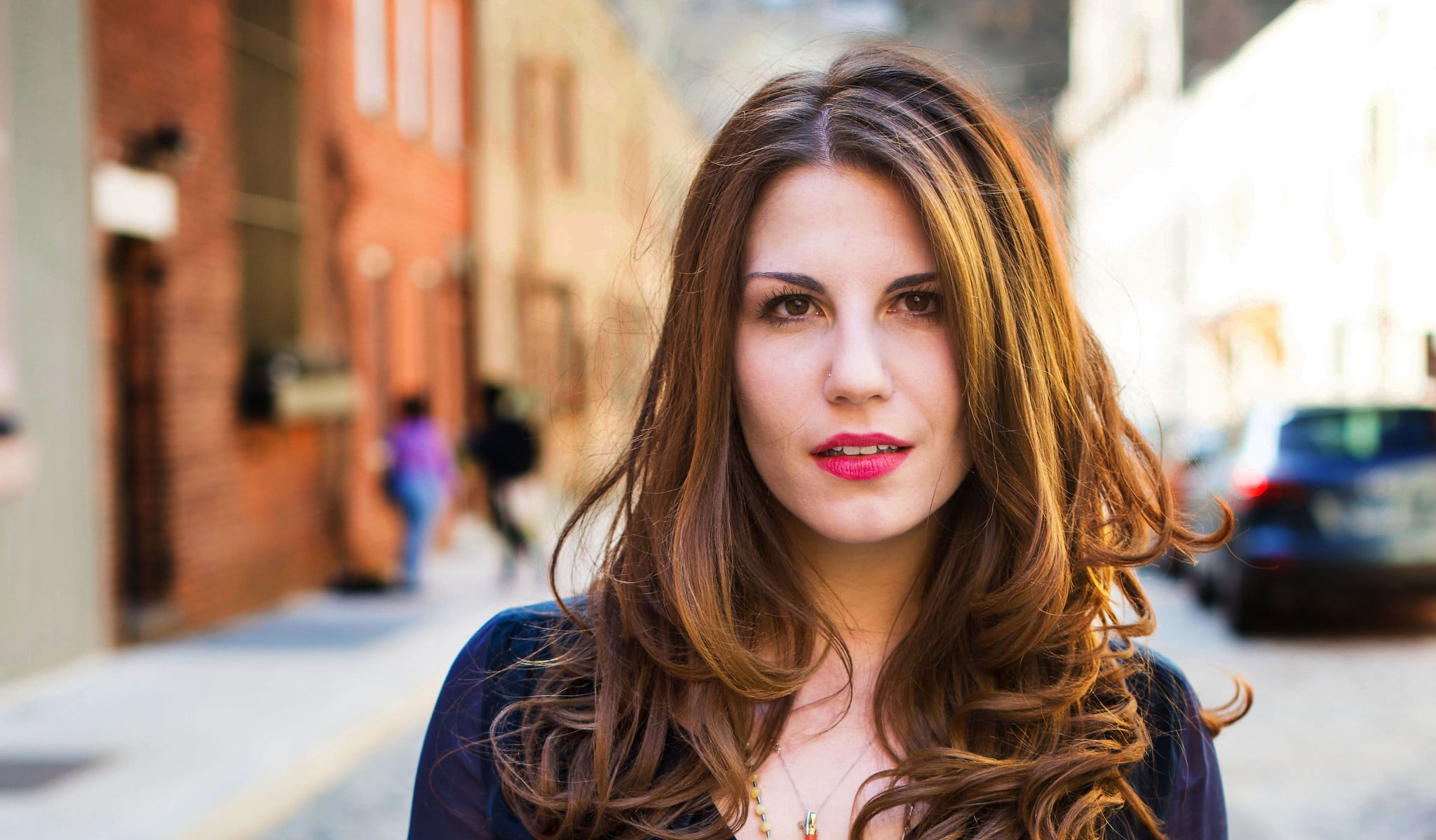 Being a badass seems to simply come naturally to Lauren Duca. She penned a scathing op-ed for Teen Vogue titled "Donald Trump is Gaslighting America" that went viral back in December 2016, and made a subsequent appearance on FOX News's Tucker Carlson Tonight show that proved she wasn't a woman to mess with.

If you haven't seen the segment, it's filled to the brim with jaw-dropping moments, but one of the real highlights (or low points, actually) comes when Carlson attempts to argue that Duca's opinions about Ivanka Trump's role in government shouldn't be taken seriously because Duca had previously covered pop culture in her work. He calls her "moronic" several times and essentially implies that young women with an interest in pop culture don't deserve a seat at the table to join in on political discourse. "You should stick to the thigh-high boots. You're better at that," he says. (Watch it here at the risk of raising your blood pressure by roughly 1000 percent.)

It was Duca's refusal to stoop to Carlson's level, offering articulate responses and logical analysis in the face of blatant misogyny, that had women everywhere cheering her on.

But as is frighteningly often the case for successful women in the public eye, the influx of attention and praise Duca received also brought an onslaught of online harassment. Martin Shkreli (the "Pharma Bro" troll who raised the price of a medication used to prevent infections in cancer and HIV patients from $13.50 per tablet to $750) tweeted photoshopped photos of himself taking the place of Lauren's husband, and tweeted that he'd purchased the domain name "marrymelauren.com." Twitter suspended him from the platform, but his legions of troll followers continued piling on, with the harassment getting so extreme that Duca even wrote publicly about receiving rape threats on Christmas.

Related:
10 Things Women Worry About That Men Don't Have To

But when I got the chance to chat with her on the phone, it was immediately clear that if anyone has the mettle to take these people on without breaking a sweat, it's Lauren Duca. And trolls be damned, she's never, ever getting off Twitter.

Read ahead for our conversation on the double standards professional women face and why confidence is always the key. You can find Lauren's work in her Thigh-High Politics column and may even see her as the star of a new political show (both in Teen Vogue) that's currently in the works, too.

This interview has been edited for length.

POPSUGAR: Part of what's come with your success seems to be dealing with creepy dudes on the internet, but it's obviously not really an option for you to just log offline in order for you to do your work. So how do you separate yourself from all that negativity and just keep doing your job?

Lauren Duca: Yeah, it definitely takes a toll. I think that there's an idea of being irreverent [in response to it], and just impenetrable, and performing that kind of badassery. But when people say mean things, they make me feel bad, and that's OK. So I've been coming to terms with that.

It's just kind of a feedback thing overall. There's a whole conversation about harassment, and how that's just seen as an employment hazard for women who are writing. And I often say [the answer] is not just "leave Twitter", because Twitter is actually how I find a lot of my work and connections, and it has absolutely enhanced my career. So to say just "leave Twitter" is to say that a woman should give up that career enhancer and be at a setback in a different way. So either you're taking emotional abuse and forging more connections or you're not forging the connections? I just don't think that's the answer.

There's a whole conversation about harassment, and how that's just seen as an employment hazard for women who are writing.

So I definitely take full breaks from my phone now, which sometimes makes me bad at texting back, but I just need to. And also, leaning into some of the positive feedback helps.

I want to be open to criticism and have an open mind, but if I let everything guide and direct what I'm doing, I'll have nothing left. It's a process, and I haven't figured it all out. It has made me angry because I know I'm a particularly resilient person, and I'm able to put up with a lot of crap because I'm scrappy and I can take it, but I don't think that's everyone's personality, and it's just not fair. Because the goal of trolling is to get a few that you don't like to be shut down and to make women feel intimidated. But it's made me feistier too, because I think it's confirmed a lot of the reasons that I write in the first place, and that I'm a feminist writer.

PS: So about that Tucker Carlson interview, which you handled like a total pro. That went super viral, and I think a huge part of why it did is because most women who've ever had a job anywhere have experienced some version of that conversation that you had – except you had to deal with it on a national stage. So how did you shut him down so well, and keep your cool so well, and how can other women do the same in similar professional situations?

So I think that I was just very confident in what I had been asked to come and speak on. I was prepared and that was unshakable, and I think that that was why he wasn't able to throw me off. I knew what I wanted to say and I was so well-versed in the topic at hand. So I was sort of just listening to what he was saying and responding to the things directly, rather than letting him kind of throw water on the dashboard. That has kind of been what I try and make the takeaway. Because obviously, it was an extenuating circumstance and you know, he is a misogynistic potato head. [Laughs]

As long as you're confident and you're informed, then you've got so much more strength to bring to the table, to any kind of discussion. And know that the only thing that is required of you to participate in any kind of discourse is just to be fully informed. We're in this moment where there's all this trolling and harassment and bullying and aggression in these toxic conversations, and everything is kind of ruled by feelings rather than facts.

PS: So when it comes to the positive side of social media, I'm curious how you've been able to use social media to leverage more opportunity for yourself.

LD: I think social media has been huge for me. Things I have tweeted, I've later been asked to write pieces on, or I've had editors find my work from me promoting it on Twitter. There are a lot of different ways. But obviously, increasing your visibility and the chance to be in conversation with the people you might be pitching is really important. And I think that there are probably college classes on this with theory of social media branding and all of that, but it's very simple in the sense that it's just putting yourself out there and working to promote your work and trying to get over the habit of saying, "Oh hey, I wrote a thing," and being proud of what you wrote. It's so awkward. Part of me wants to be like, "LOL, here's some hairball I threw out." But it should be, "No, I actually am proud of this and I spent a couple days writing it. Please read it. I'd like you to read it."

PS: Yeah, totally. I feel like women sometimes don't give themselves the opportunity to share that they did a good job on something without a bunch of qualifiers, because it's just ingrained in us not to.

LD: Well, also when do you ever hear men being accused of shameless self-promotion? Never. I mean, it'd have to be so egregious. And even then sometimes it's perceived as endearing. Sometimes it's like, "Oh, he's so cocky, ha ha." It's cute. When it's a woman it's gross and the phrase that comes up is "attention whore."

PS: I don't think I've ever heard a guy be called an attention whore in my life.

LD: Oh, no. It's a silencing tactic, and I think that obviously women internalize that. I internalize that. And I have to kind of check myself all the time. Where is this doubt actually coming from? It gets in the way of feeling capable. It gets in the way of sharing your work. It's intricate and so crappy. But I guess as much as you can, push past it and be defiantly confident in your own capabilities. That's what I've been trying to tell myself in the mirror every morning. I don't know how well I've been doing, but it's getting better.