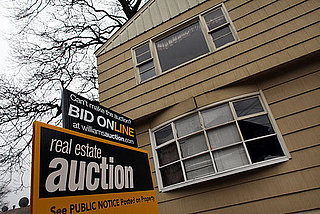 A few months ago, a friend's perfect world came crashing down. Her parents faced the threat of foreclosure, and she lost her job. Stuck with a huge school debt to pay, she was at her wit's end. I'm glad to say things on the job front worked out for her, and now she's been given a slight reprieve with the freezing of foreclosures. Several banks, including the one my friend belongs to, have halted foreclosures in order to conduct closer inspection of faulty repossessions. This lead to pressure on President Obama to impose a nationwide freezing of foreclosures, according to the BBC. However, it was reported this morning that the President does not wish to back the proposal of a nationwide freeze, but is supportive of investigative foreclosure probes that the state attorneys general are planning.

On a personal level, she says that she's glad for the freeze, because her family has been dealing with slow responses to their applications for loan modification, heightening the risk of foreclosure. They would make constant calls to their bank's customer service to check on the status of their paperwork, only to be directed to inept reps who weren't very efficient or knowledgeable.

On the other hand, experts are saying that this freeze can have disastrous implications for the housing market. These delays in foreclosures can deter potential buyers who may find legalities of buying distressed homes too complicated to bother with. It's a struggle for me, because I know on the macro-level, the market would benefit if the freeze was lifted, but at the same time, these are real people facing the threat of foreclosure. My friend told me that losing that home was like losing a part of their family, because it was their family home and there is a huge emotional component that goes along with it. What about you — do you think that the freeze is a good idea?