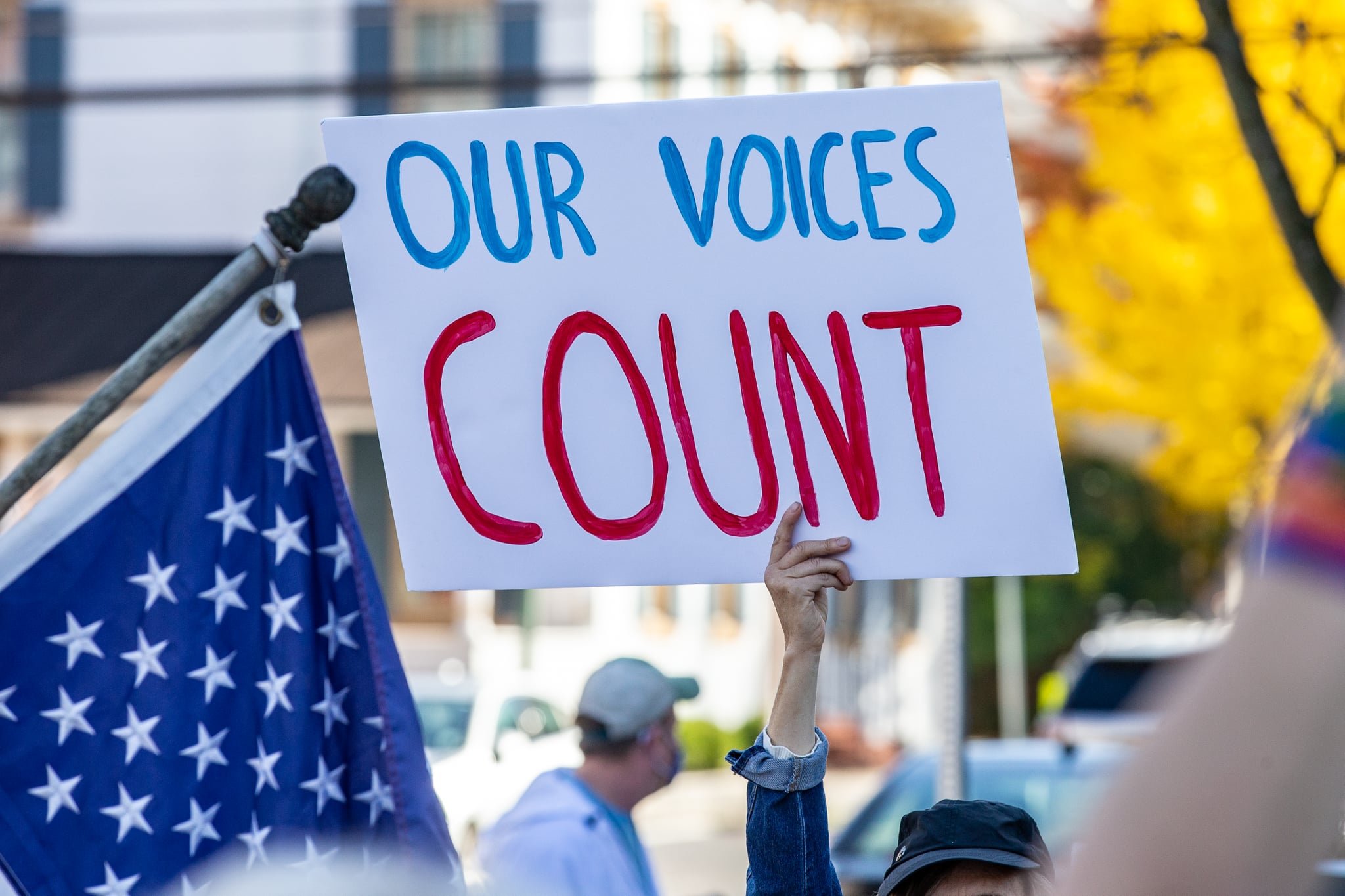 After the long, stressful haul of the 2020 election cycle, it's easy to want to take a break, but it's more important than ever that activism continues beyond the presidential election. While news cycles may focus most on politics during major federal election years, real change also happens in the times in between. It's why we can't tune out and stop doing the necessary work during the times that get less attention: success comes from steady efforts and long-term organizing, not all-at-once rushes.

"Off years are a figment of our imagination!" Run for Something cofounder Amanda Litman told POPSUGAR, noting that, in 2019, there were 85,000 elections across the country, and approximately the same number of state, local, and municipal races are happening in 2021. Plus, she says, "the outcome of the 2022 federal elections are dependent on the organizing we do in 2021." Her organization, Run for Something, provides resources and support to progressive candidates across the country, especially in down-ballot races, to build a more robust progressive base and build more awareness within individual communities. One of their signature events, National Run for Office Day, is actually scheduled for Jan. 19 in 2021 — the day before the inauguration!

Activism in years like 2021 is also about reworking strategy — something which, Run for Something cofounder Ross Morales Rocketto notes, has met with a mixed reaction among the establishment. "Some people really get it and really want our help, [but] there are some folks who want to keep doing things the way they have been. Folks are trying to do the best they can with what they've got, and so many of these organizations have been existing with a scarcity mindset for so long." Getting involved in these organizations at the local level is one of the most effective ways we can collectively make change: start with the small fights and get in it for the long haul. "Power building takes a long time," Rocketto reminds us. "It's not linear, you're always going to have setbacks, but it's the only way to win long-term power . . . the way we do it is by building power and infrastructure on the ground." Last year was one of enormous activism, particularly regarding the experiences of Black Americans and other BIPOC, and keeping topics of justice and equality at the forefront is something that has to happen consistently, not just around federal elections. "You're not going to hear me say Democrats lost [an] election because of 'defund the police,'" Rocketto says. "This is something candidates are going to have to talk about, especially on the local level — 'defund the police' is largely a state and local issue. We're going to have to come to terms with that, and we can't ignore it, because if we ignore it, we're letting Republicans define what 'defund the police' means and what all of these issues mean. We need to be out there having these conversations with voters." It's not just about the people phone-banking, fundraising, and running for office, either — change and activism happen in everyday life. The nonprofit Define American focuses on immigrant experiences in the entertainment industry, where it works to change perceptions — and, by extension, political behavior — by impacting the media we experience. In September 2020, they released a Norman Lear Center study entitled "Change the Narrative, Change the World," which used qualitative and quantitative research to prove how three immigrant storylines studied had a positive impact on perception, feelings, and behaviors among viewers — and that's the kind of work that can (and must) continue away from elections.

"The work to ensure that immigrants are recognized in this country as fully human persists. Inclusive, accurate portrayals of immigrants in popular culture can move the needle toward that type of humanization," Adrián Escárate, communications coordinator at Define American, told POPSUGAR. Charlene Jimenez, director of entertainment partnerships and advocacy, explains further. "We're always working to humanize the immigrant experience through media and we believe, and have proven through our research, that accurate portrayals of these communities have the power to propel audiences to real-life action. We try to celebrate every single inch of progress we see even as we keep our eyes and momentum on the big picture."

These kinds of stories are just one piece of the puzzle, as the entertainment industry as a whole reckons with the calls for racial justice that have reached a peak in 2020, particularly with the year's Black Lives Matter protests and an increasing focus on elevating BIPOC voices in all corners. This isn't something new, though; it's part of an ongoing struggle to get more authentic storytelling and stories that lead to real change. "The best thing people can do is to stay in the fight and continue to support work that represents the diversity of America. This year has been a lesson on the importance of being vocal when an injustice occurs or when the status quo is challenged and just how powerful that can be," says Escárate.

Related:
Passion, Power, and Honor: 9 Young Latinx Activists Who Are Changing the World

Continued activism isn't just about donating to political causes and calling your reps — it's also about supporting projects that lead to change. "Responsibility and wanting to 'do better' can sometimes feel abstract and overwhelming. An immediate action you can take to support BIPOC representation in media is to simply watch and support movies and TV shows from creators who belong to those groups," Jimenez reminds us. "Your viewership, your movie tickets, your downloads, your clicks — they all translate into measurable success. It sends a message to gatekeepers that there is a strong appetite out there for authentic stories and that those stories need to be seen and supported."

And for those who want to get involved more directly? "It's not too late to run in 2021 and 2022 races!" Litman says. "It is critical that we have good people running, because those people are going to be in the forefront of rebuilding." It's equally important, she explains, to avoid burnout in order to really have a long-term impact. "What does a sustainable political environment for you look like? For a lot of people, paying attention to national politics day in and day out is f*cking exhausting and demoralizing! There's a reason that people who stay in this work long-term often stay in it locally. One, you can feel the impact because it's where you live, but, two, you're going to get wins more often, and the wins are going to directly make your life better. Pick the issue or the community that you feel can get you energized, then get to know the people who are doing the work and find out what they need." More than ever, if we want progress that lasts, we can't just participate in the trends and movements of the moment — we have to stay committed and put in the work even when no one is watching.