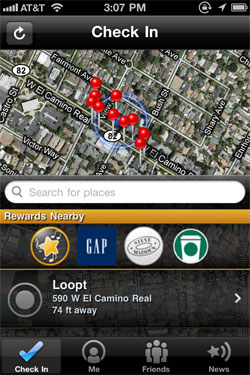 The awesome thing about SCVNGR's new rewards program is that it will show you redeemable rewards in your surrounding area. Loopt Star is stepping up its game and has added the same feature to its own already robust rewards program by using your phone's GPS location to tell you what kind of deals and discounts are around you now.

Although Loopt Star is your second-favorite geo location app (just behind Foursquare), it really beats the latter in offering you ways to save money since you don't have to be the "boss" or "mayor" of a location to cash in. Loopt Star is constantly updating its roster of discount partnerships, having just added a 20 percent off discount at Steve Madden stores nationwide. Just check in, and you'll automatically get 20 percent off a purchase of $50 or more. You can't beat that deal!