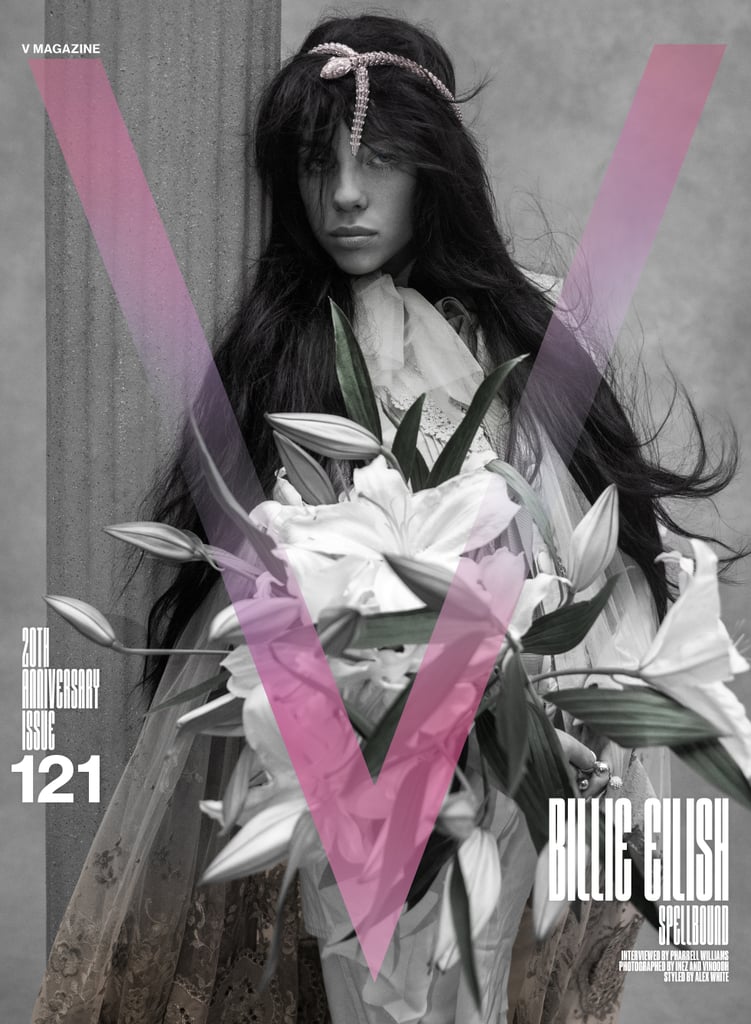 Billie Eilish might be known for her deeply emotional lyrics and her comfortable loungewear looks, but in a new set of photos from V Magazine, we're seeing the 17-year-old star like we've never seen before: with superlong hair and bangs. In honor of the magazine's 20th anniversary, Eilish was interviewed by Pharrell Williams about her rise to fame. She spoke candidly about being "the Britney Spears of Generation Z" and being wise beyond her years, but it's the stunning photos of her new look that first caught our attention.

Despite recently dyeing her roots slime green and experimenting with different hair colors in the past, it's the first time we're seeing Eilish with a look like this. Her wispy bangs are similar to Camila Cabello's, and paired with the hip-length extensions, it's a gorgeous, edgy look. Just when we thought she couldn't possibly get cooler, Eilish topped off the cover look with a Bulgari necklace worn as a headpiece. Check out the photos from her V Magazine shoot ahead, and pick up the anniversary issue on Aug. 26.

Related:
The Biggest Hair Trends Around the World Right Now, According to the Pros
Previous Next Start Slideshow
Billie EilishBeauty NewsCelebrity HairCelebrity Interviews

Summer Olympics 2021
Proof the Olympic Village Has Everything: There's a Free Hair and Nail Salon For Athletes
by Jessica Harrington 5 hours ago

Zoey Deutch
Zoey Deutch Debuts "Money Piece" Highlights, and All of a Sudden We're Back in 1992
by Karenna Meredith 2 days ago