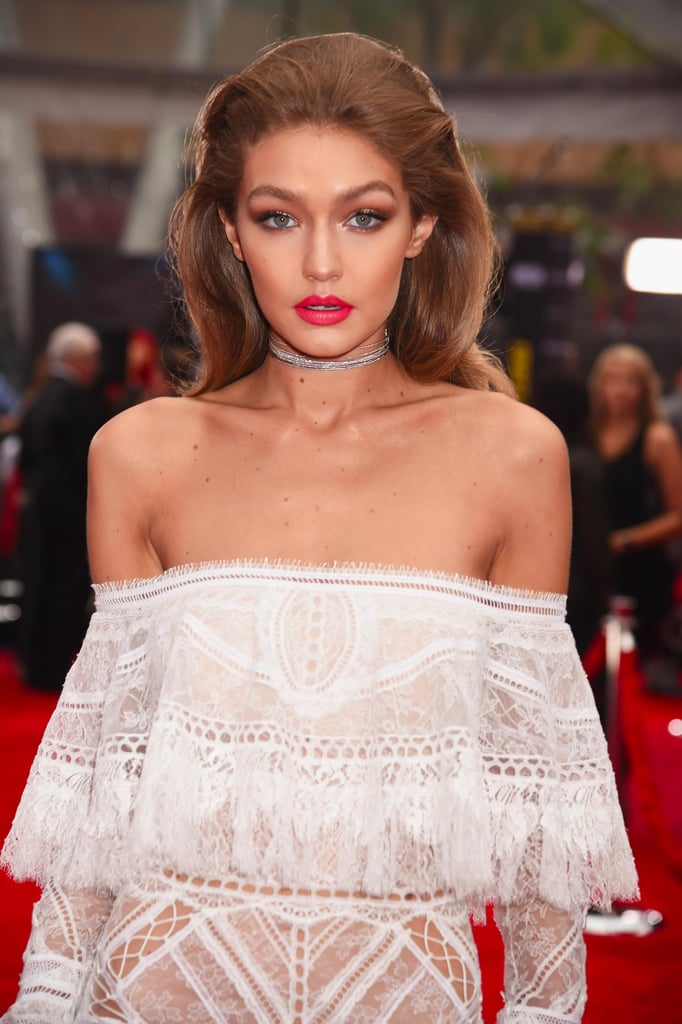 Though many predict the "baby face" (simply flushed cheeks) will be trendy come 2017, Gigi Hadid proved at the 2016 American Music Awards that the contouring and strobing fad certainly isn't dead.

The megamodel walked the red carpet with classically contoured cheeks (lots of bronzer juxtaposed by highlighter) and similarly shaded eyelids. Her lips looked gorgeous thanks to a bright shade. Her lipstick was actually the mix of two Maybelline products — Maybelline New York Color Sensational Creamy Matte Lip Color in All Fired Up ($6) as the base and Maybelline New York Color Sensational The Loaded Bold Lipsticks in Nude Thrill ($6) on top. Celebrity makeup artist Erin Parsons did Gigi's makeup using Maybelline products.

Her blond hair was pulled back with tons of volume at the crown and no part. It flowed into beach waves down her back.

Celebrity hairstylist Bryce Scarlett did Gigi's hair using GHD products. "For her red carpet look, Gigi was wearing a gorgeous white lace gown that had a sexy '70s vibe, and we wanted her hair to reflect that, too," he said in a press release. "We took inspiration from Lauren Hutton and went for brushed back curls that would look glamorous, but still effortless."

To create all of that volume, Scarlett used the GHD Natural Bristle Radial Brush in size 4 and a blow dryer to pull her strands up and away from the face. Thickening spray and backcombing it added to the height around her forehead.

"Since we wanted big, voluminous curls, I used the GHD Soft Curl Iron to curl her hair," he added. "The one-and-a-quarter-inch barrel creates nice, bouncy curls, which was exactly what we were going for."

Keep reading to see zoomed-in shots of her makeup and all angles of her hair.

Oscars
1995 Called, and Honestly, It's Really Proud of These Beauty Looks From the Oscars
by Kristin Corpuz 17 hours ago

Ariana Grande
Ariana Grande Links Up With BTS at Grammys Rehearsals, and Hey, How About a Collab?
by Kelsey Garcia 1 hour ago

by Angela Law 41 minutes ago