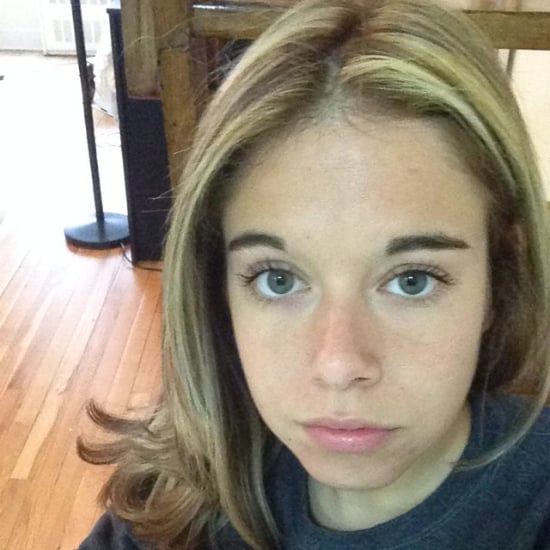 How I Ruined (and Rescued) My Overtweezed Eyebrows

When POPSUGAR Beauty editor Lauren Levinson pulled me aside after an editorial meeting and told me I made an eyebrow faux pas, I had no idea what she was talking about. "They're supposed to start here and here," she said, pointing to both sides of the bridge of her nose. If that was true, mine were far from perfect — beginning in the middle of my eye rather than at my nostril.

I was shocked and frankly pretty crushed. While I don't consider myself a beauty guru, I've always thought that eyebrows — from their distinctive shape to their thickness and color — were a big part of my persona. In fact, I had recently dyed my hair blond, and I'm all about the contrast of my light locks and my dark arches like Cara Delevingne or Margot Robbie in The Wolf of Wall Street.

Knowing that I was the reason my own brow line didn't dip at the right angles or flatter the rest of my facial features was upsetting to say the least. I felt panicked — as if people had been silently judging me for months — and I had to put an end to it. But at the same time, this wasn't as simple as getting a quick wax or pedicure. In the back of my mind, I was already counting how many weeks it'd take for my brows to grow back — how many weeks it'd take for me to appear "normal" again.

Lauren, who had visited Jared Bailey, Benefit's global brow expert, earlier this year, explained how to create the ultimate brow balance — and it's all about pinpointing the start, the arch, and the end points of your brow. To figure out where to start your brows, you should draw a line from the dimple of the nose to the beginning part of your brow (which actually makes your nose appear thinner). By drawing a diagonal line from the outer corner of your nose, through the pupil, to the top of the brow, you find where your arch should be at its highest point. Lastly, start at the same spot on your nose, but trace your waterline to figure out where your brows should end.

I was ready to let my hair grow back — but while that sounds easy, it was a pretty awkward process that took about seven weeks. On the flip side, I definitely learned a valuable beauty lesson, and arriving at my brand-new set of brows was totally rewarding. Below, a personal timeline filled with random patches of hair and failed fill-in attempts.

Personal Essay
The Reality of Being Black, Undocumented, and Never Qualifying For DACA
by Morelys Urbano 3 weeks ago