The original beauty ad that got people talking.

Original Story: Makeup guru Jeffree Star has found himself in hot water after an Asian beauty blogger named Nikita Dragun posted a photo of herself featured in his latest ad with noticeably darker skin. In the caption of the photo, Nikita attributed her golden skin complexion to a highlight she called "Siberian Gold."

Social media users were quick to call out the fact that Nikita's darkened skin tone is considered blackface, which was commonly used in 19th century minstrel shows to promote racial stereotypes and mock the darker skin of African-Americans. Keep reading to see what Nikita's natural skin tone looks like and see why Twitter users are not happy with the controversial ad.

"It's very unfortunate that a section of the community is choosing to interpret and liken my image in Jeffree Star's campaign to blackface. The message of this campaign is intended to welcome all gender identities, sexualities, and races to enjoy the makeup line.

Additionally, the creative design for the imagery called for high contrast between light and shadow, and low lighting, which lends itself to creating a mood for the imagery. This campaign is so exciting and so disruptive. I'm proud to be featured in it as a transgender woman of mixed race (my mother being Mexican and my father Vietnamese). I'm disappointed that anyone would choose to critique the creative design of this incredibly inclusive campaign, rather than celebrate the diversity in it." 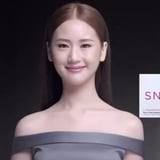