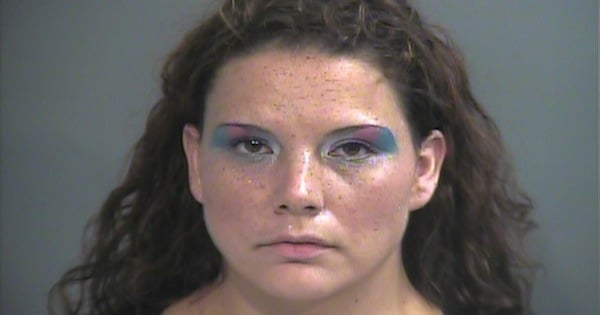 Some people are so attractive, it should be a crime. But this week in Fayetteville, AR, a woman was actually arrested because of beauty — shoplifting products, that is. Brandy Allen faces charges of shoplifting and disorderly conduct after police were called to Fayetteville's Ulta, where she was reportedly spotted stuffing fistfuls of eye shadow into her purse (without even checking the shade!). When asked to see the contents of her bag, Allen surreptitiously would attempt to make each shadow look used before removing it as requested. After disturbing several shoppers and children with loud swearing, she was taken into the Washington County Detention Center and later released on bond.

We believe that people should be presumed innocent before proven guilty, but considering that she was arrested on suspicion of stealing $144 worth of eye shadow, her mug shot is making a strong case. However, we strongly commend her bravery for wearing eye makeup that seems to be inspired by My Little Pony. Try incorporating pastels into your own beauty routine via hair dye or nail polish.

Storm Reid
Storm Reid Treated Herself to an Inspiring Tattoo For Her 17th Birthday: "I’m So Appreciative"
by Chanel Vargas 4 days ago