For years, Shea Moisture has prided itself on catering to the hair product needs of women of color, but the brand's most recent advertisement has even the most loyal fans really pissed off. The ad, which featured mostly white women, spoke about "hair hate" and the tagline encourages users to "embrace hair love in every form." While the company may simply have been trying to be more inclusive in the ad, its supporters claimed that Shea Moisture abandoned its core brand and audience.

A post from Curly Nikki said that this is "the perfect example of gentrification." It explained that the one black woman in the beginning and the group seen in the last three seconds take away everything Shea Moisture has represented through the years. "I don't understand why inclusive campaigns aimed at white women necessarily exclude dark skinned Black women," Nikki said herself.

Twitter users also went off on the brand, questioning what "inclusiveness" means to Shea Moisture and some even boycotting its products. Just four days later, Shea Moisture deleted the video and issued an apology.

"Wow, okay – so guys, listen, we really f-ed this one up," the company opened the apology on Facebook. "Please know that our intention was not – and would never be – to disrespect our community, and as such, we are pulling this piece immediately because it does not represent what we intended to communicate. You guys know that we have always stood for inclusion in beauty and have always fought for our community and given them credit for not just building our business but for shifting the beauty landscape."

Keep reading to see some of the Twitter reactions and understand just how horrified some of Shea Moisture's fans were. 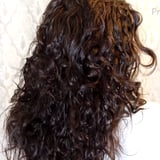 Drew Barrymore
Drew Barrymore's New Tattoo Is So Meaningful to Her, It Actually Made Her Cry
by Danielle Jackson 2 days ago

Rihanna
Just FYI, Rihanna's Pixie Cut Is Back — and It Feels Like 2012 Again
by Danielle Jackson 2 days ago