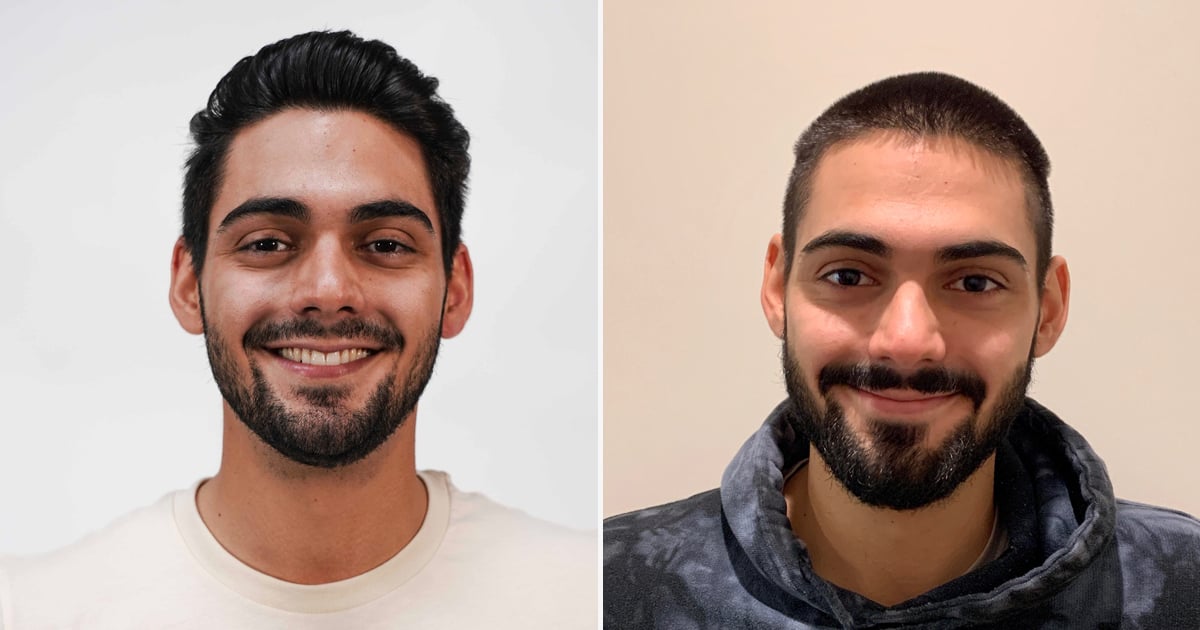 If I have learned anything from social distancing over the past five weeks, it's that you can continue almost all of your beauty treatments at home. From laser hair removal to extravagant nail art, people are indulging in all kinds of beauty services to keep up with their normal self-care routine. So, when my boyfriend Shaun asked me to cut his hair, I understood where he was coming from. After all, tons of people are lending a hand to their partners right now, from Sarah Hyland's subtle trim on Wells Adams to Gwen Stefani's full-blown mullet on Blake Shelton. That means I could do it too, right?

Even before the shelter-in-place mandate, Shaun was overdue for a haircut, but now knowing he wouldn't be able to visit his trusted barber for a while seemed to be making him especially uneasy. He kept complaining that his hair was getting too long, and that he needed me to shave his head because he couldn't do it himself.

At first, I was really uncomfortable with the thought. What if I cut too much? Accidentally nick his ear? Or, even: what if he has a particularly odd-shaped skull under all that hair? I didn't want that much responsibility, or to make him upset if it didn't turn out the way he had envisioned. Finally, after much persuasion and him telling me, "It's just hair, it will grow back," I decided to take matters into my own hands, grab his electric trimmers, and never look back.

Step 1: Set Up the Space

Since we live in a small apartment, we converted our kitchen/living room into a barbershop. I laid out all the tools needed, put a towel down under a chair, and got to work. Since we didn't have a hairstyling cape on hand (go figure), Shaun insisted on wearing a garbage bag to prevent hair from falling on his back. That didn't last long, as he immediately became hot and itchy as soon as hair started falling. He ripped off the bag off immediately.

Step 2: Section Off the Hair on Top

He instructed me to cut a "three" on the sides and the back and an "eleven" on top. (Excuse me, what?) I had to remind him that I wasn't well versed in barber's code, so he explained the numerical scale of a trimmer: low numbers provide a closer shave and higher numbers leave more hair on the head. We sectioned his hair into three pigtails on the top to ensure I wouldn't accidentally shave his entire head, since let's be honest, I had no idea what I was doing.

Once I started shaving Shaun's head, I realized electric trimmers are almost foolproof, and when I got into the groove, I actually enjoyed it. Sure, there were tiny hairs all over our hardwood floors, but I was now a self-proclaimed hairdresser and I needed to focus on my craft to ensure I didn't miss a single strand of hair. I became so serious about my "work" that Shaun had to physically take the trimmers away from me so I wouldn't go over his head another time.

When it was all said and done, Shaun's haircut looked good and he had no complaints. I felt proud of the work I did and told him I could become his full-time barber. (He politely declined and then ordered me pizza as my payment for a job well done.) I won't be quitting my day job to cut hair any time soon, but it's nice to know that I could help my boyfriend feel a little better about himself during this strange time.