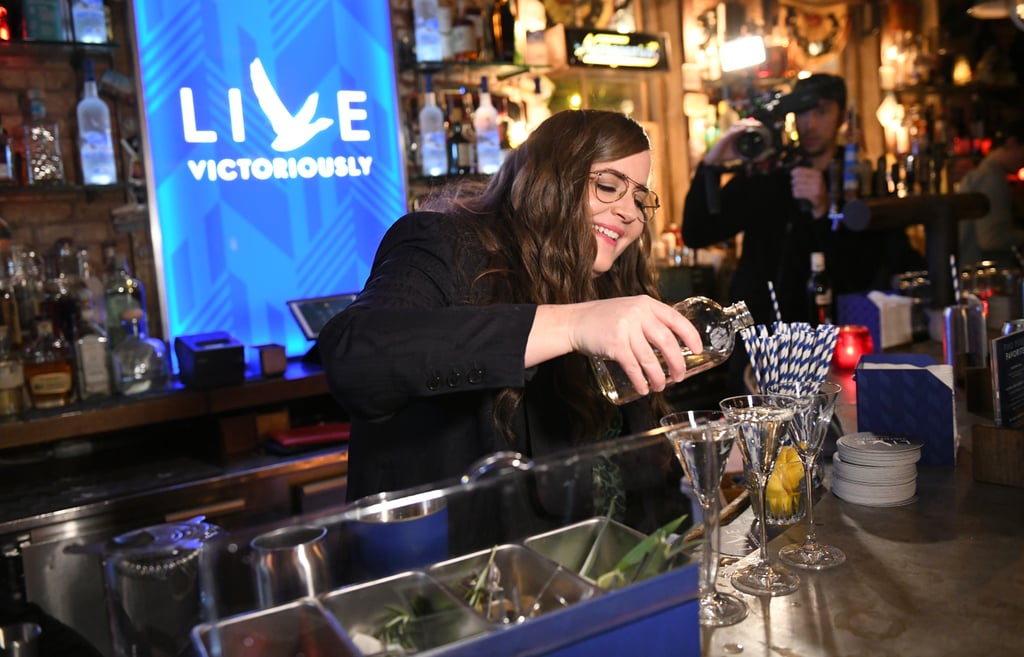 Aidy Bryant describes herself as a "classic vodka-cranberry person," and yet, she's found herself making frilly cocktails for the after-work crowd on a Tuesday. The Saturday Night Live comedian and Shrill star recently surprised patrons of Extra Fancy in Brooklyn, NY, on April 16 to kick off Grey Goose's new Live Victoriously brand platform, which celebrates the joy in everyday moments.

"I live for a surprise," Aidy told POPSUGAR in an interview prior to the event. Though she was technically manning the bar, the happy hour also offered a fun night out for her. "Especially because I work so much, I think when you can make something fun happen it's worth it."

Aidy will have another chance to celebrate come Saturday night. Describing her post-SNL routine, "You do the show, you have all the adrenaline, and then you go straight to this party where we all get to drink and celebrate and let off a little steam. That's kind of the best," she said. "Then you sleep the whole day on Sunday and order some pizza. That's the dream."

While Aidy was slinging drinks in Brooklyn, her cast member Colin Jost was doing the same in Manhattan. In fact, the two were even sending each other pictures from their "dueling" happy hours to see who was having the most fun. (Jamie Foxx, by the way, was also a surprise bartender that evening at a hotel bar in Times Square.) Following her stint as a bartender, Aidy treated the crowd to some stand-up. "I love to do comedy, so I'll go anywhere and do it," she said.

We can only imagine that after the event, Aidy went home to put on some slippers and . . . hand sanitizer? Allow her to explain: "I am big into slippers. Slippers are a good, cazh way to live around the house. I just like little, simple stuff." She added, "I know this is silly, but I have a hand sanitizer that I love. If I'm having a day of it, I will just use that hand sanitizer. I don't even know what it's called!"

Grey Goose might be known for elevating everything from the fanciest of martinis to the coolest of cocktails, but Aidy prefers to sip on a simple-but-classic combination — her signature drink is a vodka-cranberry! "That's what it's gotta be — gotta be Grey Goose, gotta live victoriously. That is kind of my drink of choice. I just like to keep it clean and simple."

Look ahead to see more from Aidy's fun night!

Netflix
On Our Radar: Carlacia Grant's Pogue Initiation Is Complete
by Victoria Messina 56 minutes ago