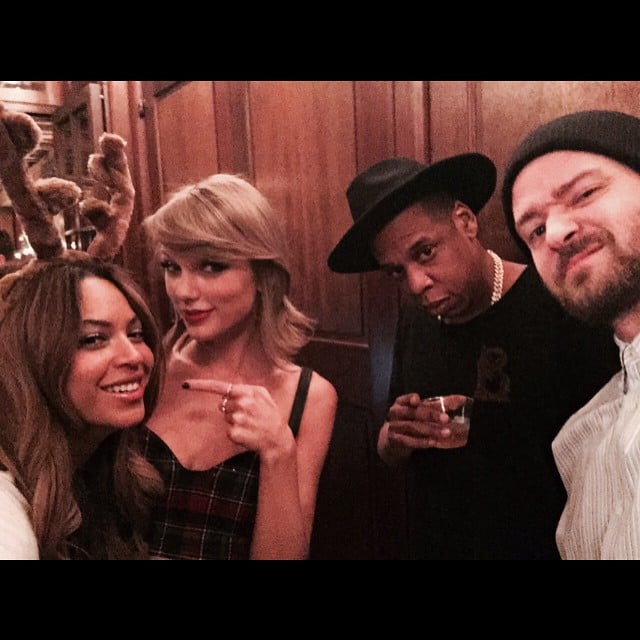 Taylor Swift's 25th birthday party in December was a veritable who's who of the music world, and now the singer is giving us another peek at the fun night. In honor of Justin Timberlake's 34th birthday on Saturday, Taylor shared a new picture showing her hanging out with Beyoncé, Jay Z, and Justin at the bash. "Happy Birthday, @justintimberlake!" she wrote in the caption. "Thank you for your music, comedy, daaaahncing, songwriting, and for taking this selfie." Justin also posted a birthday moment on Instagram on Saturday, sharing an adorable picture of Jessica Biel's baby bump.

As for Taylor's celebration, the singer kicked off the start of her mid-20s with a bang in her NYC apartment. According to Us Weekly, a source said the stars sipped on Blue Moon and Stella beer and indulged in "about eight bags of Japanese food." At one point, the group gathered with Taylor's other pals — including Ansel Elgort, Sam Smith, Karlie Kloss, and the Haim ladies — for epic Instagram snaps. The collage shows Taylor wrapping her arms around Sam and Justin, who donned a rather realistic emoji headpiece. "So this is being 25..... #WHAT #bestbirthdayEVER," Taylor captioned the post. When it came time for the birthday cake, Selena Gomez stuck by Taylor's side as she blew out the candles.

Although the picture is star-studded, it doesn't feature everyone in attendance, namely Nick Jonas and Olivia Culpo, Chrissy Teigen, Kelly Osbourne, Charli XCX, Shawn Mendes, and members of 5 Seconds of Summer. Taylor's birthday wasn't all about partying with stars, though, as the singer performed at Z100's Jingle Ball concert at Madison Square Garden earlier in the evening. Read on to see how Taylor spent her birthday, and then check out 40 of her most jaw-dropping moments.

Selena Gomez
Selena Gomez Shares a Taste of Her At-Home Cooking Show, and Things Get a Bit Messy
by Karenna Meredith 5 hours ago

Beyoncé Knowles
This Little Girl Has Mastered Beyoncé's "My Power" Dance From Black Is King, and Just Wow
by Murphy Moroney 1 day ago

Selena Gomez
Selena Gomez Finally Confirmed When Rare Beauty Launches, and the Wait Is Almost Over
by Jessica Harrington 1 day ago

Beyoncé Knowles
Yes, Black Is King Is a Reimagining of The Lion King — Did You Catch All the References?
by Amanda Davis 2 days ago