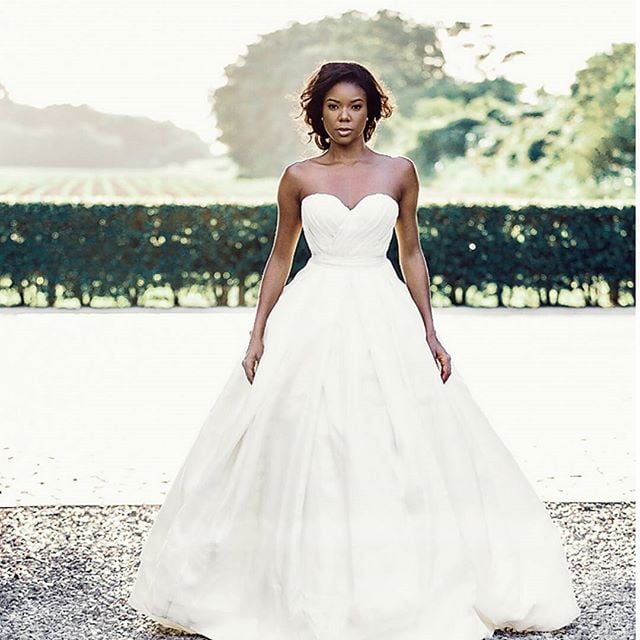 Dwyane Wade and Gabrielle Union tied the knot in Miami last August, and now the actress is sharing stunning new photos from the big day. Gabrielle got in on the Flashback Friday fun on Aug. 22 and posted never-before-seen shots of her stunning wedding gown on Instagram. In one photo, captioned, "Racing to the altar," Gabrielle holds her dress up while running in front of a stunning garden backdrop. In another, she stands perfectly still and stares into the camera, writing, "When you're a bride but also a Superhero and you gotta save the day."

The adorable couple said "I do" last Aug. 30 in front of a small crowd of family and friends, including John Legend, who performed during the ceremony. The big event kicked off on Aug. 29 with a rehearsal dinner in South Beach. Gabrielle shared an exciting photo of her and Dwyane leaving the party on Instagram, writing, "Let's gooooooo! #thewadeunion." The bride wore a custom Dennis Basso gown, and the groom sported a look by DSquared, as well as a bow tie from the Dwyane Wade for The Tie Bar Wedding Collection that he designed himself. The pair began dating in 2009 and got engaged in December 2013, when Dwyane popped the question with the help of his two children from a previous marriage and the nephew he's helped raise. Congrats to the happy couple on their first anniversary!

Lana Condor
Getting Married? Shop Amazon Handmade's Picks Curated by Lana Condor and Her Fiancé
by Anvita Reddy 2 days ago