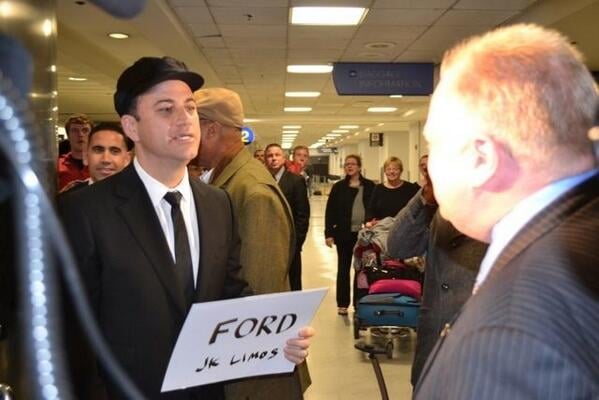 Jimmy Kimmel's comedic hijinks aren't limited to his late-night desk. The comedian made a special trip to LAX on Saturday to give Toronto Mayor Rob Ford a warm welcome to LA. Donning a cap and suit fit for a driver, Jimmy met Rob in baggage claim and offered the controversial political figure a ride to his hotel. The stunt comes after Rob announced plans to rub shoulders with the stars at the Oscars on Sunday. Before his flight from Toronto took off, the mayor reportedly told the Toronto Sun, "I am going to the Oscars. It's going to be fun." Hardly a stranger to grabbing headlines, Rob gained international fame after he admitted to using various drugs, including crack cocaine. Keep reading to see Rob's arrival.