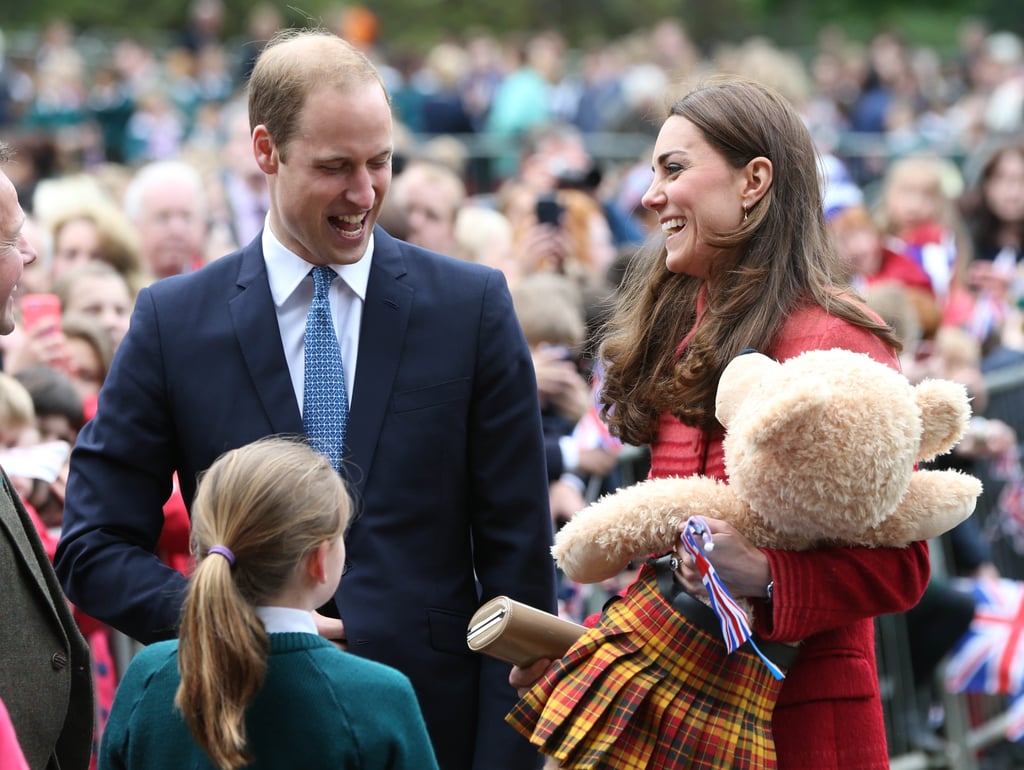 The Duke and Duchess of Cambridge — or, as they are referred to in Scotland, the Earl and Countess of Strathearn — made a trip up to their namesake area of Scotland on Thursday in their first joint appearance since wrapping up their official tour of New Zealand and Australia in April. Kate Middleton and Prince William made stops at Strathearn Community Campus, Crieff High School, and MacRosty Park, where they were greeted by a large group of fans, including one guest who gave the couple (or rather, Prince George, who was not at the event) a giant teddy bear decorated in their Strathearn tartan colors. Kate herself looked stylish in a red coat by Scottish designer Jonathan Sanders. She accessorized with a celtic brooch that was given to her as a wedding present. The two also made a stop by Glenturret Distillery, where they sampled whisky and mingled with local representatives of the community. While checking out the whisky, William egged Kate on to try a few sips, which may have been a bit too strong for her. After sipping, her eyes reportedly started to water.

While Will and Kate are no strangers to Scotland (Balmoral is, of course, Queen Elizabeth II and Prince Charles's official Summer vacation spot) this was the first time that they had visited their namesake area since they were given the titles of Earl and Countess of Strathearn on the occasion of their 2011 wedding. After taking a brief break from official engagements following their trip down under, Kate and Will have prepared a busy slate of appearances in the early weeks of June, including taking a trip to France with the royal family to honor a D-Day memorial.