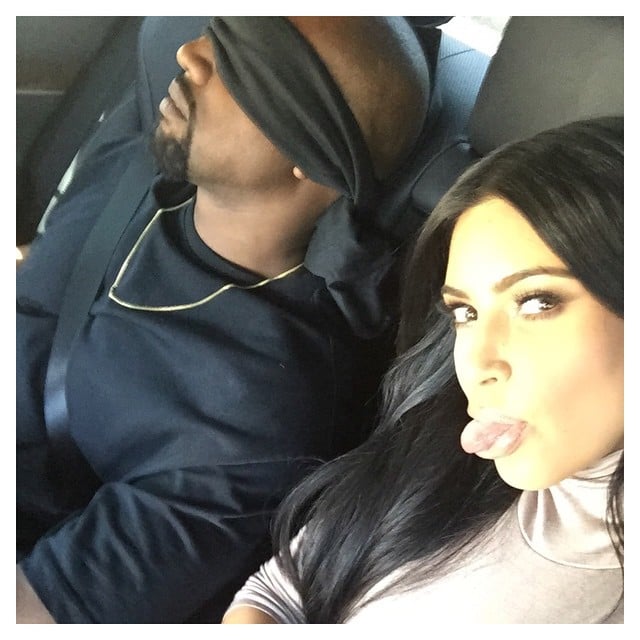 Kanye West turned 38 on Monday, and his wife, Kim Kardashian, helped him celebrate with a truly epic gift: she rented out the Staples Center in LA and brought all of the rapper's friends along for a basketball game. Instead of watching the Los Angeles Lakers take the court, Kanye and his friends split themselves into two teams — East and West — for their own game. Kim's sister Khloé shared an Instagram snap of the group in their jerseys, writing, "Kim rented out staples b*tch!!! Him and his boys are going to ball!!!! Happy birthday Yeezy!!!!" Kylie Jenner also posted a photo of herself with Khloé and her BFF Malika getting silly courtside.

About the party, a source told E! Online that the Laker Girls performed, as did John Legend, who "sang the national anthem." He also sang "Happy Birthday," video of which Kris Jenner shared on Instagram. Other sports stars were in attendance, too; the source added that Houston Rockets player James Harden and rapper 2 Chainz acted as coaches, and former NBA player John Salley was the announcer. As for Kanye's guests and teammates? The insider revealed that Justin Bieber, Tyga, Pusha T, and all of Kanye's longtime friends played basketball with him, as did NBA stars Russell Westbrook and John Wall. Kobe Bryant, Magic Johnson, Carmelo Anthony, Shaquille O'Neal, and Scottie Pippen all made celebratory videos that "showed up on the jumbotron."

While Kim and Kanye are no strangers to giving each other lavish gifts, Kim did hint at a basketball-themed celebration on Twitter earlier in the day; after wishing Kanye a happy birthday, she teased, "Kanye's bday today is gonna be a major SWISH!!! I planned the craziest surprise! Will share later! Sooooo excited!!!!!!" For reference, Kanye's forthcoming studio album is reportedly going to be titled Swish. Keep reading to see photos from Kanye's big birthday party at the Staples Center.

Tinashe
Just a Warning: You'll Need More Than 2 Hands to Count the Cutouts on Tinashe's Sexy Dress
by Perri Konecky 21 hours ago

Celebrity Instagrams
Dear White People May Be Ending, but We'll Always Have These Moments to Remember the Cast By
by Monica Sisavat 23 hours ago