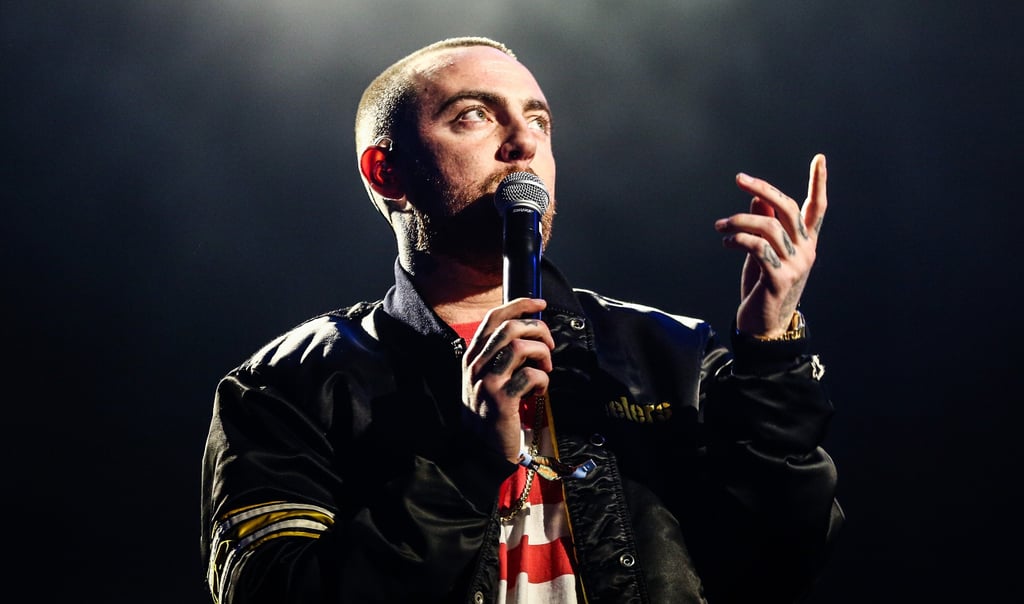 On Tuesday, a couple thousand Mac Miller fans and supporters gathered at Frick Park's Blue Slide Playground park in Pittsburgh to pay their respects to the rapper who died of a suspected overdose at the age of 26 on Friday, Sept. 7. Mac is a Pittsburgh native, and the park, which inspired his debut album Blue Slide Park, was one of his favorite childhood hangout spots. The event was hosted by Nightfall Records, a recording label based in Pittsburgh. On its Facebook event page, the label wrote, "We would like to bring the city together in full force for this legendary icon. Mac deserves to be sent off with an evening of celebrating his life, discussing his struggles, and remembering his stories; most importantly for his iconic work that brought joy into the lives of everybody who listened."

Attendees honored the late Swimming rapper with flowers, artwork, and paraphernalia of his favorite NFL team, the Pittsburgh Steelers. They also repainted the playground's blue slide, and some even signed a petition to rename the park "Mac Miller Blue Slide Park."

Mac's grandmother, who wore a Blue Slide Park album sweatshirt, was in attendance and took some time to talk to reporters. In one statement, she said that out of all the places in the world Mac took her when he was on tour, none of them were quite like "the warmth of Pittsburgh." Fans also played some of Mac's songs, including Swimming's "Self Care," and rapped along to the lyrics.

In a statement to E! News hours after Mac's death on Friday, his family said, "Malcolm McCormick, known and adored by fans as Mac Miller, has tragically passed away at the age of 26. He was a bright light in this world for his family, friends and fans. Thank you for your prayers. Please respect our privacy. There are no further details as to the cause of his death at this time."

View photos and videos of the vigil from Tuesday ahead.

Music
Romeo Santos Finally Got the Documentary Treatment, and Here's the Trailer
by Irene San Segundo 2 days ago

Katy Perry
Teenage Dream: Katy Perry Reveals the Advice She'd Give to Her "Boy Crazy" Younger Self
by Karenna Meredith 2 days ago

Music
Tell Me Más: Paloma Mami on Pastelera, Jordan 11s, and the Songs That Get Her Hyped
by Irene San Segundo 4 days ago

Spotify
Pump Up the Volume! This Graduation Playlist Is Filled With Feel-Good, Finally Done Jams
by Haley Lyndes 4 days ago