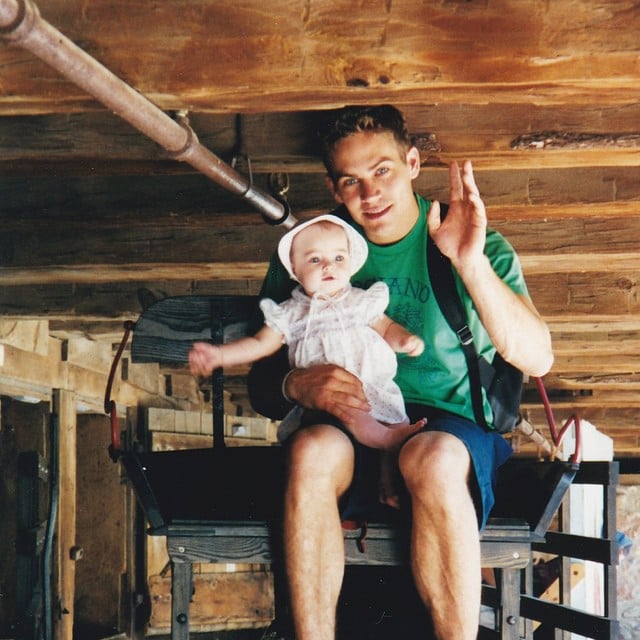 A year after his death, Paul Walker's friends and family are opening up to share beautiful photos and memories of the actor. The Fast and Furious star died in a car accident on Nov. 30, 2013. Yesterday, on the first anniversary of his death, Paul's 15-year-old daughter, Meadow, shared a moving photo of Paul on her Instagram account. In the photo, the actor is holding a baby Meadow on his lap. Meadow captioned the photo simply: "I love you."

Paul's close friend and costar Vin Diesel also shared a tribute to Paul, posting a photo to Facebook of his daughter, Hania, with the actor and relaying a heartbreaking and sweet story in the caption:

"He was a part of so much in my life... long personal talks with my mother or babysitting the Alpha Angel... he took a certain pride in being uncle Pablo... after all, we were filming a scene in FF4 the day she was born, and he being the only one I told, encouraged me to go in and cut the umbilicle cord.

"He was an important part of my transition into fatherhood... that healthy family member, with the most positive outlook on life...

"A year ago today... a year of mourning... and his absence still leaves me speechless. We miss you Pablo..."

Lindsay Lohan
Lindsay Lohan Announces Engagement to Bader Shammas: "My love. My life. My family. My future."
by Princess Gabbara 22 hours ago