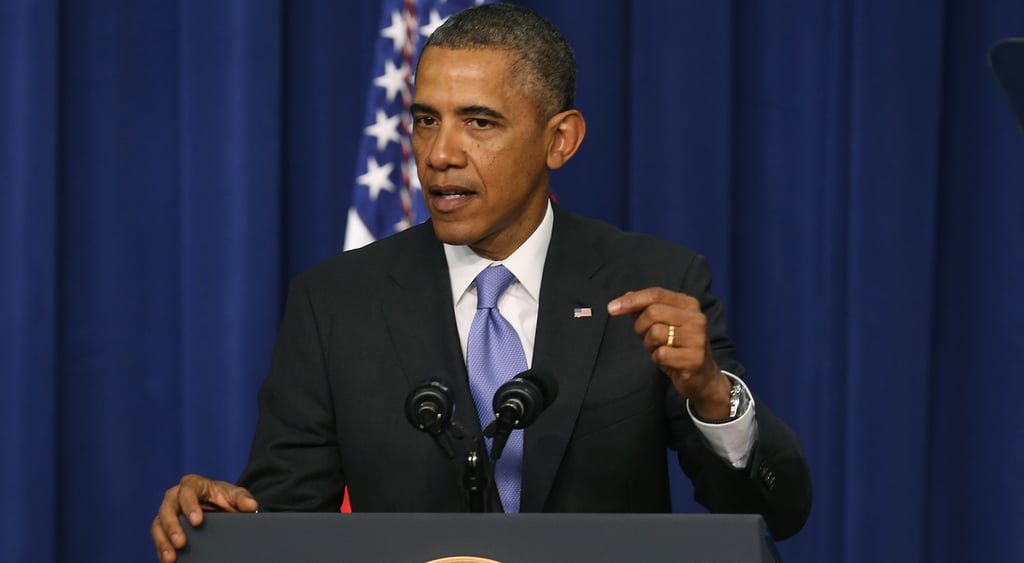 Worried that the government is reading your dirty text messages? President Obama addressed the NSA surveillance program in a speech on Friday, highlighting its purpose along with new changes he's made to the process. The expansive program first made headlines back in June, when Edward Snowden leaked information about NSA records. Since then, issues of privacy versus security have been hotly debated both in the US and around the world. Watch video of Obama's speech, and check out our breakdown of his most important quotes below:

What he said: "The challenges posed by threats like terrorism, proliferation, and cyber attacks are not going away any time soon, and for our intelligence community to be effective over the long haul, we must maintain the trust of the American people and people around the world."
What that means: Let's get this straight: the NSA isn't going away any time soon, but Obama has heard the uproar, and he's willing to make a few changes.

What he said: "If any individual who objects to government policy can take it in their own hands to publicly disclose classified information, then we will never be able to keep our people safe or conduct foreign policy."
What that means: Snowden is not getting clemency.

What he said: "A number of countries, including some who have loudly criticized the NSA, privately acknowledge that America has special responsibilities as the world's only superpower, that our intelligence capabilities are critical to meeting these responsibilities, and that they themselves have relied on the information we obtain to protect their own people."
What that means: Leaders in countries like Germany and Brazil have been angry about the US spying on their leaders, but privately, they also know that US intelligence can be good for them too.

What he said: "Those who are troubled by our existing programs are not interested in a repeat of 9/11, and those who defend these programs are not dismissive of civil liberties. The challenge is getting the details right, and that's not simple."
What that means: The relationship status between the US and surveillance? It's complicated.

What he said: "The program grew out of a desire to address a gap identified after 9/11. . . . The program does not involve the NSA examining the phone records of ordinary Americans. Rather, it consolidates these records into a database that the government can query if it has a specific lead — phone records that the companies already retain for business purposes."
What that means: Remember the 9/11 attacks? Obama's pointing out what's at stake for America. Since 9/11, security measures were upped, but it doesn't (or, at least, shouldn't) affect everyday US citizens.

What he said: "Effective immediately, we will only pursue phone calls that are two steps removed from a number associated with a terrorist organization instead of three."
What that means: The scope of monitored calls will be more limited than before.

What he said: "Our efforts will only be effective if ordinary citizens in other countries have confidence that the United States respects their privacy too. And the leaders of our close friends and allies deserve to know that if I want to learn what they think about an issue, I will pick up the phone and call them, rather than turning to surveillance."
What that means: Obama isn't spying on his world-leader friends anymore, because he trusts that he can discuss issues with them directly.

What he said: "US intelligence agencies will only use such data to meet specific security requirements: counterintelligence, counterterrorism, counterproliferation, cybersecurity, force protection for our troops and allies, and combating transnational crime, including sanctions evasion."
What that means: Unless you're violating national security in some way, the NSA doesn't care who you're texting.

What he said: "Our intelligence agencies will continue to gather information about the intentions of governments — as opposed to ordinary citizens — around the world, in the same way that the intelligence services of every other nation does. We will not apologize simply because our services may be more effective."
What that means: #Sorrynotsorry.

Barack ObamaPoliticsNews
Around The Web