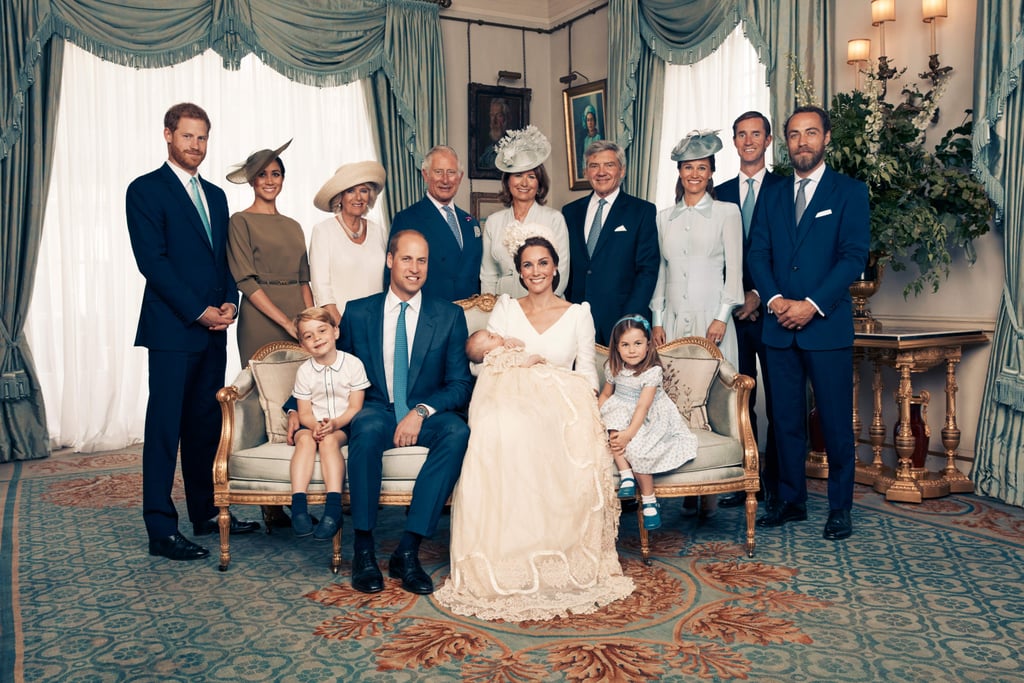 Prince Louis's christening portraits are here, and his big sister Charlotte managed to steal the spotlight — would you expect anything else? On Sunday, the royal family shared a handful of official photos from their third child's christening, which took place at the Chapel Royal at St. James's Palace in London on July 9. In the sweet snaps, Kate Middleton cradles her baby boy in her arms in the garden of Clarence House and poses lovingly with the rest of her family in a series of group shots. Huddled around the sleeping 3-month-old are his parents; siblings George and Charlotte (who is adorable while checking on her baby brother in one photo); and grandparents Prince Charles and Camilla, Duchess of Cornwall, and Michael and Carole Middleton. Kate's brother James and pregnant sister Pippa and her husband James Matthews make an appearance, as do newlyweds Prince Harry and Meghan Markle.

Prince Louis entered the world on April 23, and his christening marked the first time we've seen the tiny royal since his official photos with sister Charlotte in May. On the same day as releasing Louis's precious pictures, Kate and Prince William popped up at Wimbledon together to watch the men's singles final, and Kate checked out Serena Williams's match with sister-in-law Meghan Markle on Saturday. Keep reading to see Louis's cute christening photos, then look back on George and Charlotte's royal baptisms.