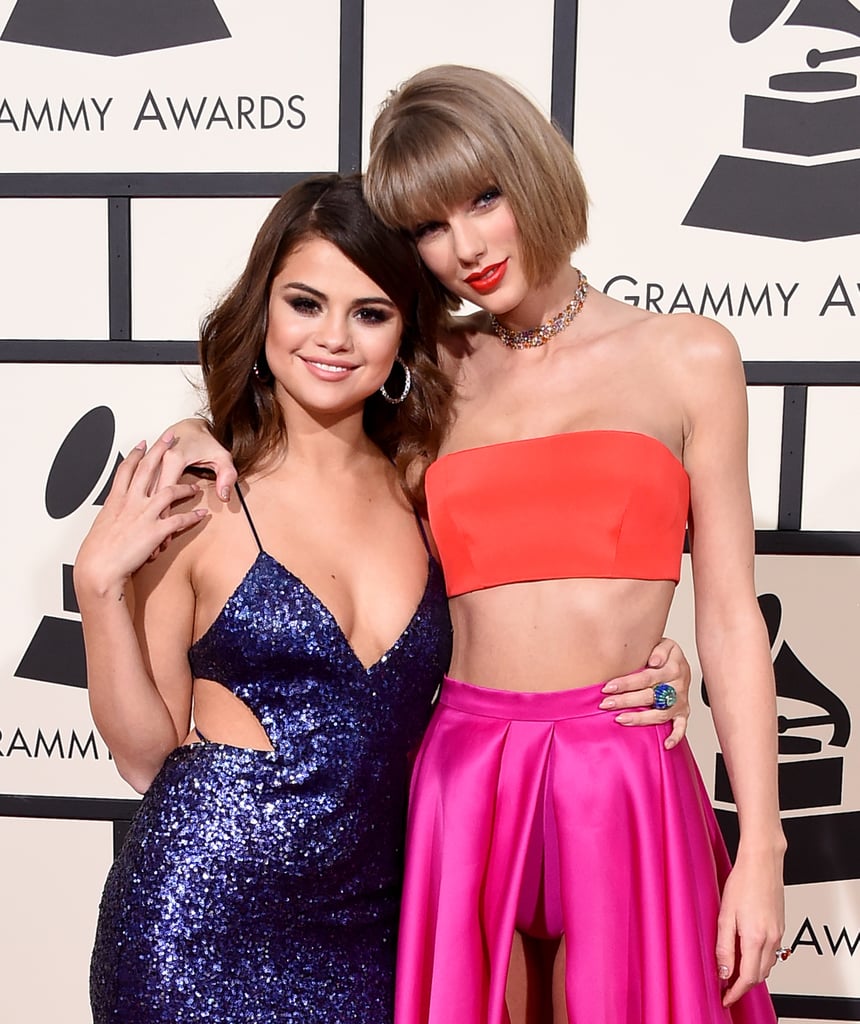 Taylor Swift and Selena Gomez brought the glamour at the Grammy Awards in LA on Sunday — the BFFs arrived together and stayed close on the red carpet in their glamorous looks. Selena stunned in a blue sequined gown while Taylor wore a colorful crop top and skirt with a brand new bob — Selena soon changed into an equally-sexy red number.The ladies hit the red carpet after celebrating Taylor's win — her first of the night! — in their dressing room; Taylor shared an Instagram video of their frantic backstage freakout, writing, "We just won a Grammy for the Bad Blood music video and we are NOT OK." Taylor later hit the stage, opening the show with a performance of her hit "Out of the Woods," and took home the award for album of year — she used her acceptance speech as a way to subtly respond to rapper Kanye West's recent comments about her.

Last week was a bit dramatic for Taylor and her famous friends after she was dragged into yet another feud with Kanye. After the rapper debuted his song "Famous," which included a controversial lyric about her, Taylor's younger brother Austin defended her with an epic Instagram video while her friends Jaime King and Gigi Hadid chimed in via social media as well. Keep reading to see all the pictures from Selena and Taylor's night, then look back on all of Taylor's Grammys performances over the years.

Accessories
Taylor Swift Got Olivia Rodrigo a Matching Ring For Good Luck, So They're Basically BFFs
by Chanel Vargas 18 hours ago

Celebrity Homes
Come On In! These Are the Best Celebrity Home Backgrounds From the Golden Globes
by Lauren Harano 1 day ago

Celebrity Couples
No, Jodie Foster Did Not Set Up Shailene Woodley and Aaron Rodgers
by Grayson Gilcrease 2 days ago