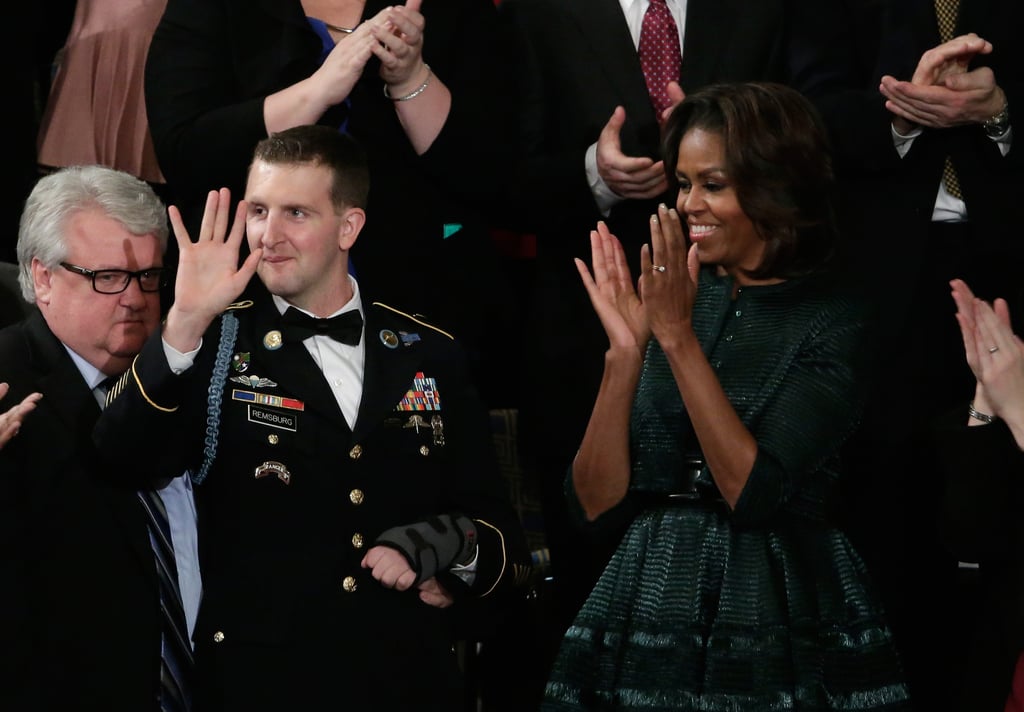 Sgt. Cory Remsburg Was the Best Part of the State of the Union

There aren't many inspiring stories on Capitol Hill, but tonight the man sitting next to First Lady Michelle Obama nearly brought Congress to tears. "I first met Cory Remsburg, a proud Army Ranger, at Omaha Beach on the 65th anniversary of D-Day," President Obama said Tuesday night toward the end of his State of the Union speech. "Along with some of his fellow Rangers, he walked me through the program — a strong, impressive young man with an easy manner, sharp as a tack. We joked around and took pictures, and I told him to stay in touch." The president went on, "A few months later, on his 10th deployment, Cory was nearly killed by a massive roadside bomb in Afghanistan. His comrades found him in a canal, facedown, underwater, shrapnel in his brain."

After months in a coma, Obama explained Tuesday, the president met him again, and he could barely move or speak. A 2013 New York Times piece about that meeting gives even more inspiring insight than we got Tuesday. It reads:

In April 2010, he returned to Bethesda for surgery to rebuild his skull. One day that month, Mr. Obama came for his annual physical and to visit patients. Entering a hospital room, he saw a photo on the wall — of himself and Sergeant Remsburg in Normandy — and did a double take, looking at the broken man lying there, and again at the strapping soldier in the frame.

"Cory still couldn’t speak, but he looked me in the eye," the president said later. "He lifted his arm, and he shook my hand firmly. And when I asked how he was feeling, he held up his hand, pulled his fingers together and gave a thumbs up."

Tuesday, Cory gave those thumbs up again, bringing the chamber to its feet for the emotional and bipartisan climax of the night. Obama said, "Cory is here tonight. And like the Army he loves, like the America he serves, Sgt. First Class Cory Remsburg never gives up, and he does not quit." See the moment below.

Source: Getty
Previous Next Start Slideshow
NewsState Of The Union