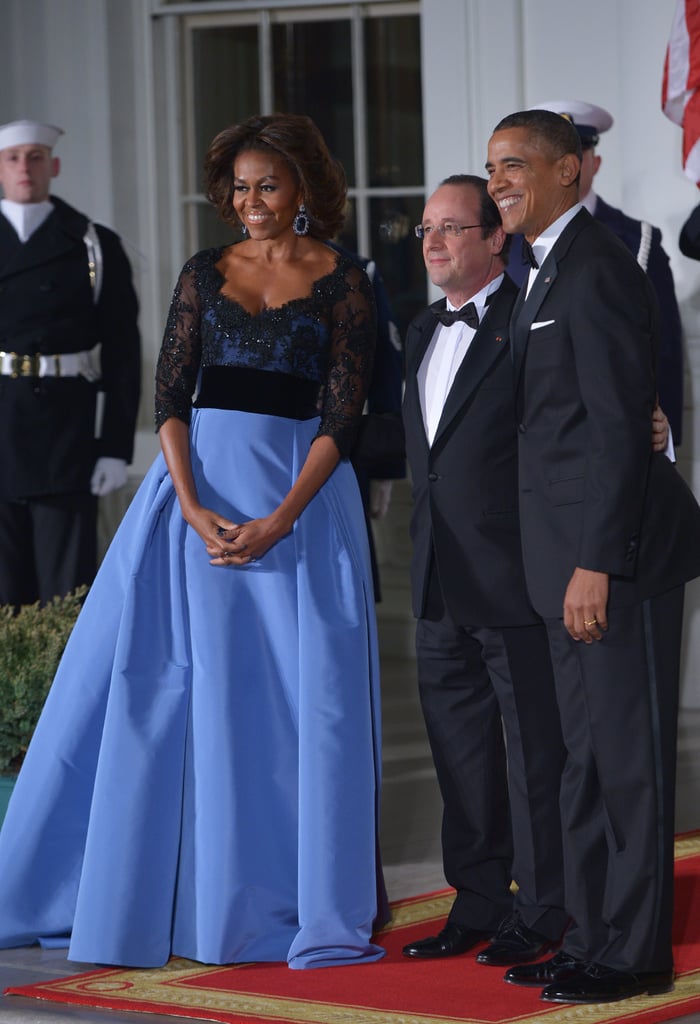 The president and first lady welcomed French President Francois Hollande to the White House Tuesday evening for a night of diplomatic partying. Michelle looked radiant in her Carolina Herrera ball gown, once again showing support for an American designer. The Obamas pulled out all the stops for their first state dinner in two years, calling on Chelsea Clinton's wedding planner to coordinate the logistics. They set up a huge tent on the South Lawn, where guests enjoyed the "best of American" cuisine that included caviar from Illinois, potatoes from Idaho, and dry-aged rib-eye beef from Colorado. For dessert, a Hawaiian chocolate-malted ganache was planned — and all the wines were American!

For entertainment, Mary J. Blige was set to perform, but she wasn't the only showbiz guest. Bradley Cooper, who is fluent in French thanks to time spent studying abroad, also got an invite, as did Julia Louis-Dryfus and her French-born father, billionaire William Louis-Dreyfus. At the dinner, there wasn't dancing, however, since the newly single Hollande came stag after recently weathering an affair and a breakup. Every state dinner is a major, protocol-heavy spectacle. While Bill Clinton hosted 23 and Ronald Reagan 35, Obama has only hosted six. And one planned for last year got canceled when the Brazilian president decided to skip her trip to Washington to protest NSA spying. But tonight was all about the special French and American relationship. See photos from the symbolically important event now.