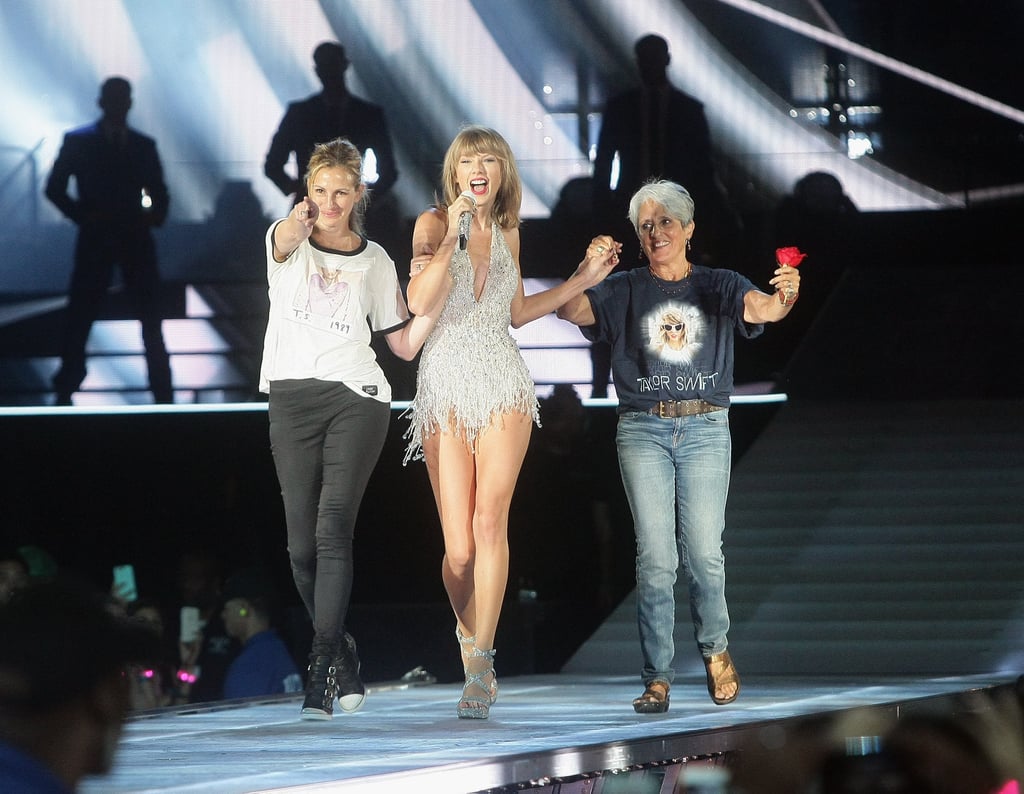 America's sweethearts dropped an epic surprise. On Saturday, Taylor Swift shared the stage with Julia Roberts during her 1989 concert in Santa Clara, CA. The ladies were in sync with musician and activist Joan Baez when they strutted to the beat of Taylor's hit "Style." Taylor later shared a sweet Instagram of Julia bowing down to Joan, writing, "Tonight Joan Baez and Julia Roberts danced it out to 'Style'. These two women are my heroes. What an honor." Meanwhile, Julia and Joan showed their love by wearing Taylor t-shirts. The audience was also treated to the stylings of British group Little Mix, who joined Taylor for a rendition of their infectious single "Black Magic."

Dedicated Taylor fans know the concert marked just one of several times her shows have gotten majorly star-studded in recent months. One night before Julia and Joan's appearance, the singer shined the spotlight on Fifth Harmony, inviting the girl group on stage to perform "Work It" for thousands of concertgoers. Earlier this Summer, Taylor took her squad goals to a new level when pals like Gigi Hadid, Lena Dunham, Hailee Steinfeld, and Lily Aldridge supported her at a performance in Rutherford, NJ, on July 10. In the midst of her world tour, Taylor has also made time for her hot boyfriend, DJ Calvin Harris — most recently, the duo shared a picture-perfect date night in LA on Tuesday, Aug. 11. Keep reading for photos of Taylor with her latest guests!

Taylor Swift
Taylor Swift Fires Back at Blur's Damon Albarn: "I Write ALL of My Own Songs"
by Princess Gabbara 3 days ago