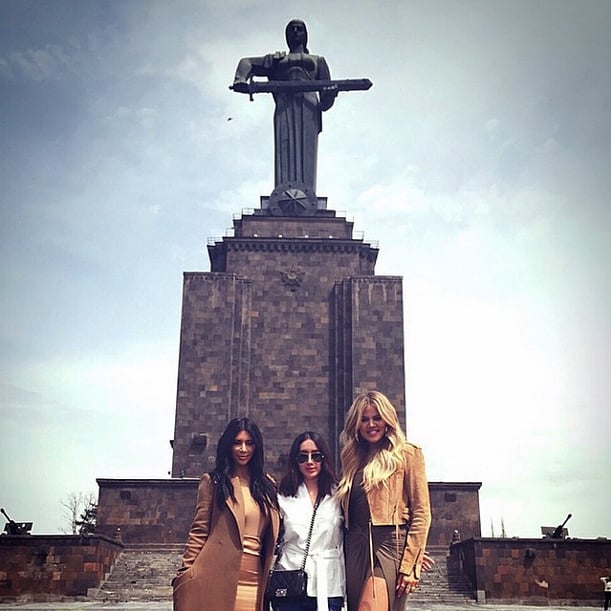 Saying that Kim Kardashian's current trip to Armenia has gotten a lot of press is an understatement. It's unclear what Kim, or any Kardashian, could do that wouldn't garner press, but for all those out there lamenting the incessant coverage, who are sick and tired of reading one more Kardashian story, let me explain why this one matters.

I've kept up with the Kardashians for nearly a decade, and not just for the voyeuristic reason we all turn on reality TV. Like Kourtney, Kim, and Khloé, I'm also Armenian. (See, stars are just like us!) And I tend to think they've done a lot for the Armenian cause over the years.

You see, up until Kardashian became a household name (hard to believe there was such a time, am I right?), Armenia wasn't one. I struggled with explaining my heritage to my blond-haired, blue-eyed friends who'd always mispronounce it "Ar-maaay-neeaan." Back then, Cher was the most famous Armenian-American, followed closely by tennis player Andre Agassi. (I'd throw Gwen Stefani in the mix, based on evidence from my cousins that her real last name is Stefanian — but that's turned out to be a rumor.) And back in grade school, when I would tell my classmates about the mass killing of an entire race (great recess banter, I know — I was superpopular), they thought only of the Holocaust. Possibly Rwanda or Darfur. Not the Armenian Genocide. They never heard of that one.

So, let's get the important bit out of the way:

During World War I, in 1915, roughly 1.5 million Armenians (more than half of the existing population) were removed from their homeland through forced deportations and then – following death marches and concentration camps – murdered at the hands of the Ottoman Empire, which is present-day Turkey. To this day, Turkey denies the Armenian Genocide ever took place. Interestingly, they aren't necessarily saying some of it never happened, they just hate to use the word "genocide" – they don't think we should be going around putting labels on things. Basically, they're acting like Armenia's crazy ex-boyfriend. And what that boils down to is, we've never gotten an apology. An omission that even Hitler seemed flummoxed about back in 1939, when he said, as an excuse for his own terrible deed: "Who, after all, speaks today of the annihilation of the Armenians?" Not only did they refuse to come clean then, but the Turkish government still actively works toward silencing and punishing those who raise the issue.

Heavy stuff, right? Yes, but does it really matter that Turkey doesn't recognize it? I mean, everyone else certainly does. Even George Clooney's wife talks about it while wearing chic legal robes! While the Armenian Genocide has been recognized by more than 20 nations, guess which one isn't on the list? The great United States.

OK, back to the Kardashians . . . You might roll your eyes at the fact that the Armenian prime minister took time out of his busy schedule yesterday to have a sit-down with the reality stars, but there's a big reason why he probably did.

This month marks the 100th anniversary of the genocide, and the Armenian people are pulling out all the stops to make sure the commemoration of those atrocious events doesn't get brushed below the fold for some other flash-in-the-pan viral story. (For instance, remember that day last November when scientists made history by landing a spacecraft on a comet for the first time? No? Maybe that's because this happened.)

Prime Minister Hovik Abrahamyan surely knows that Kim could do more for the Armenian cause than any political leader, including our own president, who pledged in his first campaign that he'd work toward resolution but has wavered, like many presidents before him, for fear of upsetting our military alliance with Turkey.

By documenting her trip on next season's Keeping Up With the Kardashians, Kim might educate young Americans who don't understand the historical significance of the Armenian Genocide . . . because it's not yet given appropriate real estate in school history books, nor is it officially taught in the classroom.

If Kim can gather up her 31 million Twitter followers and 29 million Instagram followers, I believe she can #BreakTheInternet for a greater good.

So, don't get too annoyed the next time Kim takes a selfie with Khloé in front of an Armenian statue or poses incessantly while eating some yummy boreg (look it up, it's delicious). Instead, appreciate the fact that she's putting her celebrity to meaningful use and help pass along her message.

Kim KardashianKeeping Up With The KardashiansPersonal Essay
Around The Web

Personal Essay
An Open Letter to My Fellow 2020 Graduates: Let the Love That Surrounds Us Motivate Our Future
by Emmy Gnat 11 hours ago

Personal Essay
I've Been Out For A While, but Still Haven't Told My Parents — And That's OK
by Anonymous 12 hours ago

Personal Essay
Even If College Is Open in the Fall, I'm Not Sure I Want to Go
by Sarah Nunez-Lafontaine 1 day ago