Harry Styles is speaking out for the first time after he was robbed at knifepoint in London on Valentine's Day. During a stop on the Today show on Wednesday morning, the 26-year-old "Falling" singer briefly addressed the incident when cohost Carson Daly asked how he was doing. "I'm OK, thanks," Harry responded. "Thank you for asking."

Just days before he attended the BRIT Awards, Harry was robbed at knifepoint in North London's Hampstead village. "A man in his 20s was approached by another man [who] threatened him with a knife," a spokesperson for the Metropolitan Police Service said in a statement at the time. "The victim was not injured. However, cash was taken from him." No arrests have been made yet, but the investigation is still underway. 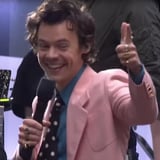 A Harry Styles Fan Burst Into Tears After Getting Tickets to His Concert, and Honestly, Same

Harry has since been focusing on his upcoming tour and recently announced that he'll be having two special shows in NYC for Halloween on Oct. 30 and Oct. 31. He'll also be dropping a new video for his latest single, "Falling," on Feb. 28. Check out Harry's full interview above.