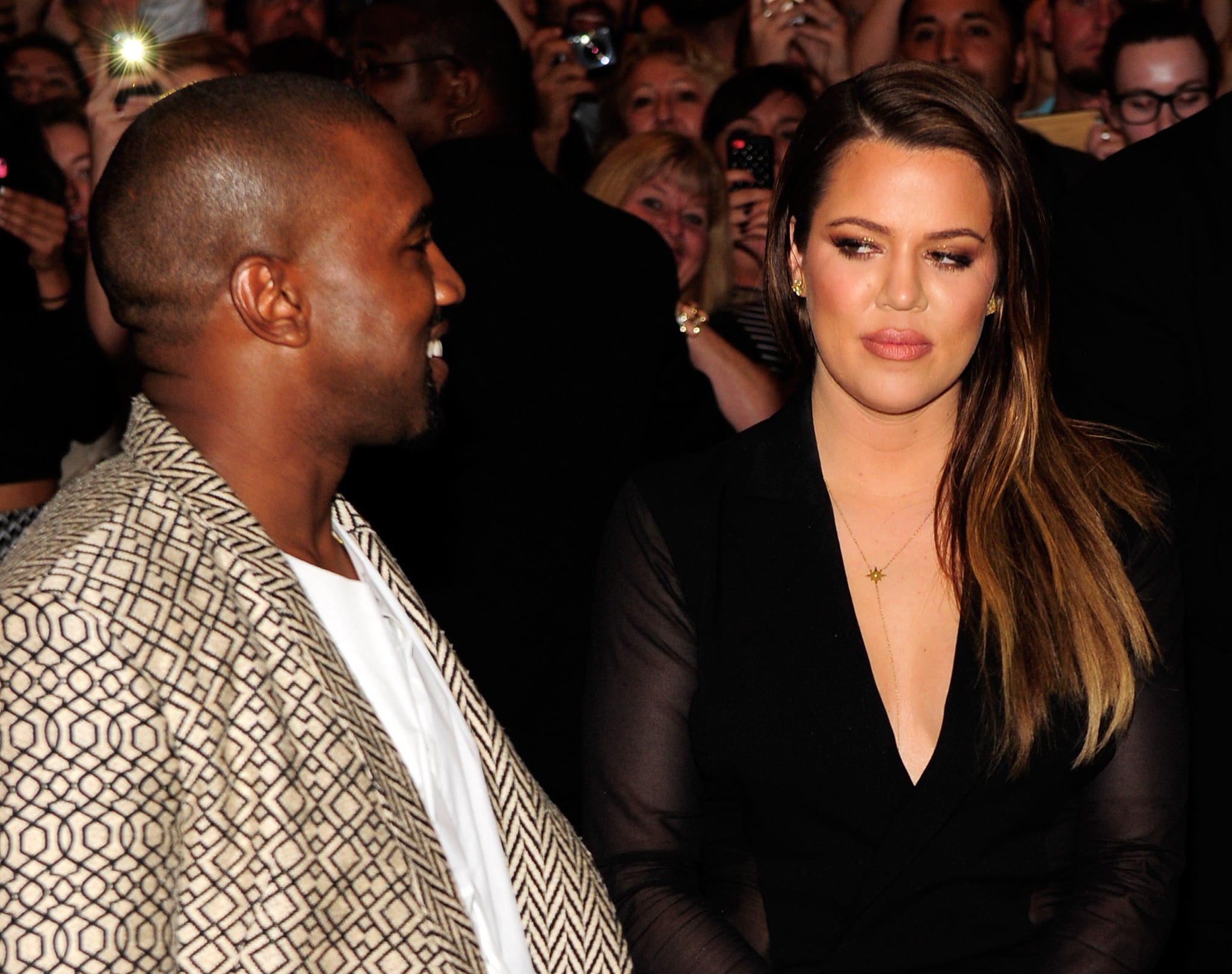 The Kardashian-Jenners have, mostly, kept quiet throughout the past year as Kim Kardashian's ex Kanye West has used his social media platform to levy allegations, claims, and comments about his former family — but Khloé Kardashian has apparently had enough. On Oct. 5, the mom of two commented on her former brother-in-law's Instagram post about an ongoing situation with fashion editor and stylist Gabriella Karefa-Johnson, in which West also doubled down on previous claims that the Kardashians "keep me from seeing my daughter" and his other three children with Kim. West has before claimed publicly that he didn't know where his daughter Chicago's fourth birthday party was in January, though he was ultimately pictured there, People reported at the time.

In her comment, Khloé wrote, "Ye, I love you. I don't want to do this on social media but YOU keep bringing it here. You are the father of my nieces and nephews and I'm trying to be respectful but please STOP tearing Kimberly down and using our family when you want to deflect."

She said West was "again" focused on "the birthday narrative," writing, "We all know the truth and in my opinion, everyone's tired of it. You know exactly where your children are at all times and YOU wanted separate birthdays. I have seen all of the texts to prove it. And when you changed your mind and wanted to attend, you came."

"Like you have pointed out yourself, [Kim] is the one taking care of your kids 80% of the time," Khloé continued. "Please Leave her and the family out of it so that the kids can be raised peacefully. 🙏🏽 I come from a place of love and I am happy to continue this conversation privately if you wish." 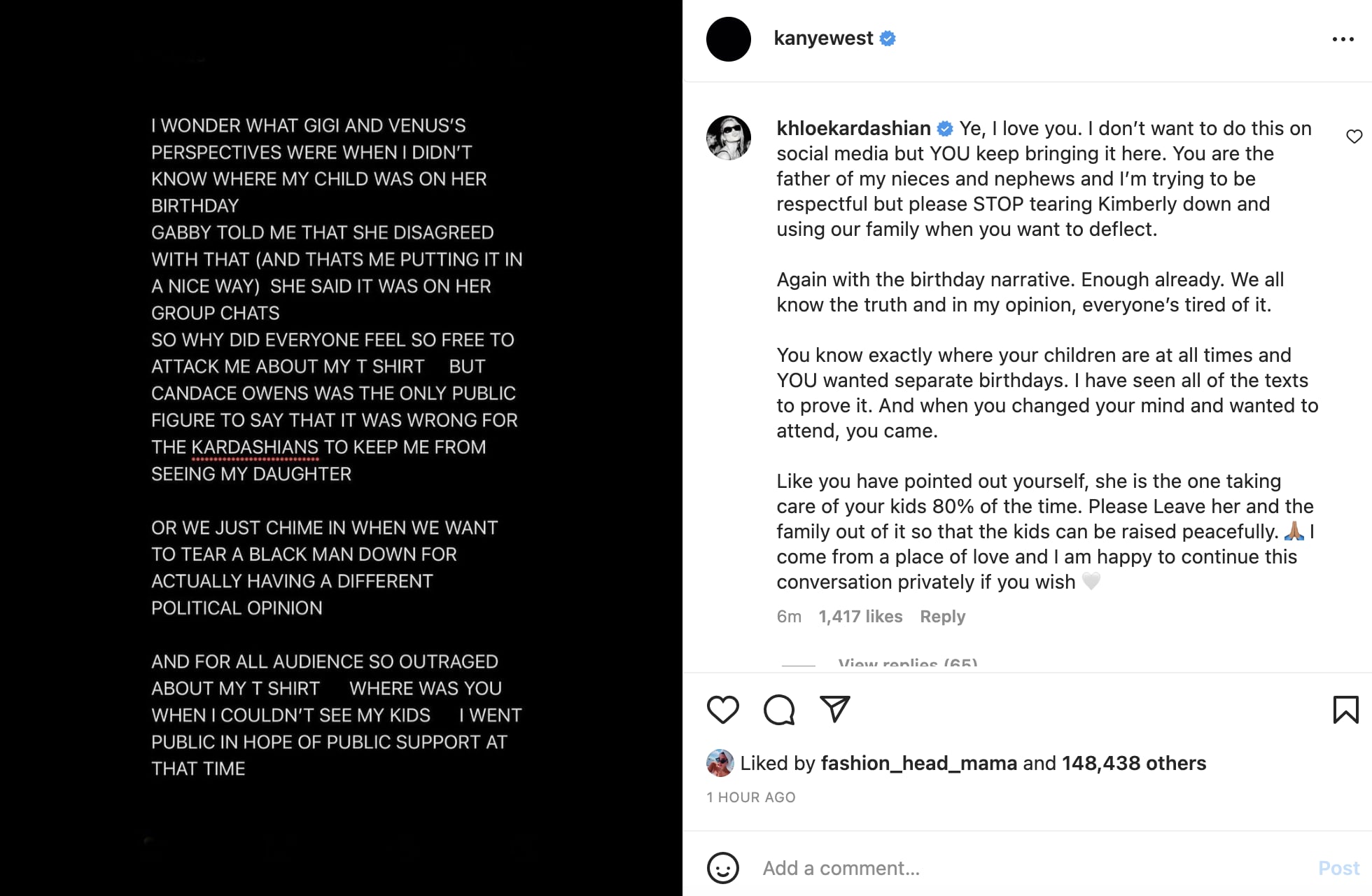 West later screenshotted Khloé's comment, and responded in his own caption, saying that she is "lying." In the all-caps message, West repeated claims about Chicago's birthday party and also wrote, "I should see my children 100% of the time but sine there's a separation it should have been 50% of the time."

The rapper's latest Instagram posts come not long after he appeared on "Good Morning America" and apologized for any stress he's caused Kim. "This is the mother of my children, and I apologize for any stress that I have caused, even in my frustration, because God calls me to be stronger," he said. During the interview, he added of coparenting with Kim, "I need this person to be less stressed, and of the best, sound mind, and as calm as possible to be able to raise those children."

Still, West claimed he feels limited in making decisions about their children. "I do have a voice, but I had to fight for it. That hurts you when you have to scream about what your kids are wearing . . . It was all a kind of disregard for the voice of something I cocreated," he said in the interview. "I have a right to have a voice on what my kids are wearing, what they're watching, what they're eating. I have a platform where I get to say what so many dads can't say out loud."

West and Kim announced their separation in 2021, and their divorce is ongoing. In addition to Chicago, they also share daughter North, 9, and sons Saint, 6, and Psalm, 3.